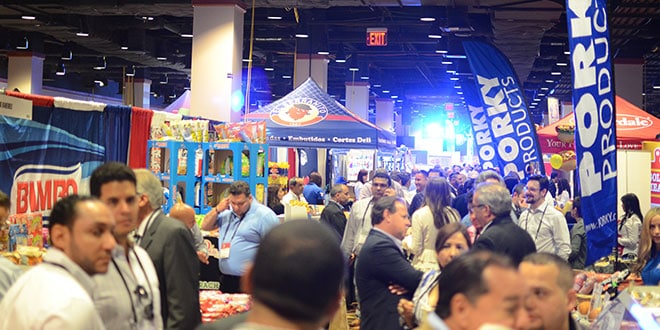 Within the six hours of the annual National Supermarket Association (NSA) trade show in New York, one of the main events for independent supermarkets, there was a real business frenzy, companies, new product presentations and everything in between. It was a true festive atmosphere, something typical when most of those present are Hispanic.

More than 200 companies participated this year in the trade show that only continues to grow, attracting the attention of businesses, distributors and food producers at a national and international level.

“We are a platform that was created to give to opportunities to those companies that don’t have the easy ability to present their products to independent supermarkets,” William Rodriguez, founder of the NSA Trade Show, told Abasto Media.

For his part, Rudy Fuertes, president of the NSA, spoke about how the importance of the National Supermarket Association lies in being able to “defend independent supermarkets in terms of how laws negatively affect their business and offer them the support they need to become better companies that offer better service to their clients and at the same time to their communities.”

Awards were presented during the NSA trade show

Hundreds of Hispanic products were presented at the trade show, highlighting the Goya Foods pavilion that stood out with a gigantic display of its rich and extensive range of foods.

The close commercial link between the Dominican Republic and independent supermarkets in the northeast area of the country was also noted, with a large delegation of private companies, commercial representatives from the Dominican government and the Dominican Consul General in New York, Carlos A. Castillo.