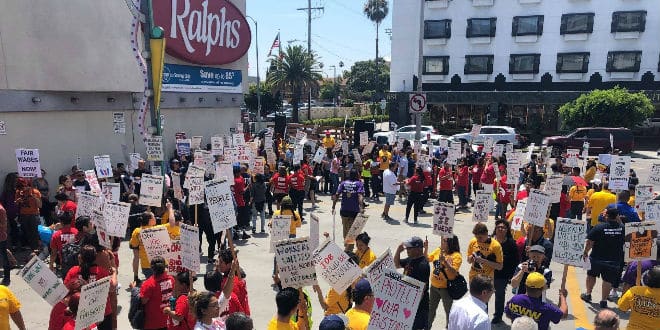 A new round of negotiations has begun, from July 10 to 12, between representatives of four supermarket chains in Southern California and the United Food and Commercial Workers International Union (UFCW) local unions, which now has the backing of the powerful Teamsters Joint Council 42 in Los Angeles in case of a possible strike.

At the end of June 96% of members of seven UFCW local unions voted in favor authorizing a strike if Ralphs, Vons, Albertsons and Pavilions supermarkets do not accept the demands of better pay and benefits to renew the work contract.

“I’m energized to walk into the next round of negotiations armed with the power to take economic action, if necessary, to win this contract, including calling a strike,” said John Grant, president of UFCW 770.

Ralphs Grocery Company stated in a press release they return to the negotiations table for meaningful and thoughtful discussions with the unions, to exchange proposals and come to a fair and balanced offer that benefits all 18,000 associates who work for Ralphs.

“As we have said all along, we are committed to continuing to invest in our associates – providing secure, stable jobs with competitive pay and benefits. We know our associates are the heart of our company,” said Mike Murphy, president of Ralphs. “With a balanced approach this agreement can be a win for everyone – our associates, our communities and our company.”

The grocery workers, who are employed by Albertsons, Vons, Pavilions and Ralphs, in more than 500 stores in Southern California have been without a contract since March and through the UFCW local unions are bargaining for better wages, and preservation of their health care and retirement benefits.

UFCW representatives arrive with more power to the new round of negotiations thanks to the Teamsters Joint Council 42 in Los Angeles, which on July 8th voted unanimously to sanction a possible strike that could impact more than 60,000 grocery workers in Central and Southern California.

“The labor movement in California has a long history of uniting against injustice, and our members are prepared to honor any picket lines that UFCW may raise if they go on strike,” said Ron Herrera, Teamsters International Vice President for the Western Region.

Additional bargaining dates with the unions have been set for the end of July and early August.