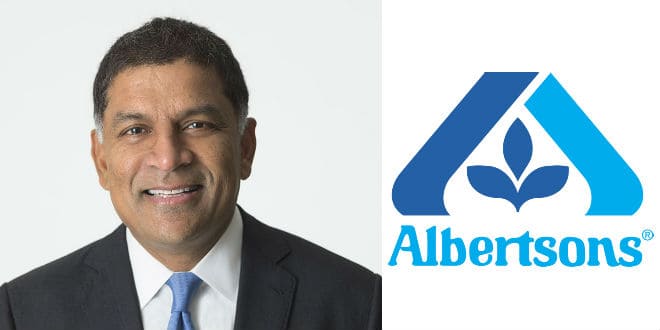 Jim Donald, currently the company’s President and Chief Executive Officer, will continue as Co-Chairman of the Board, with Leonard Laufer serving as the other Co-Chairman. The company’s longtime leader Robert Miller has been named Chairman Emeritus and will continue to serve as a member of the board of directors, according to a press release.

Sankaran has been CEO of PepsiCo Foods North America since December 2018. Prior to that, he was named in 2016 as the company’s president and chief operating officer. He will depart the company on April 12.

Over his ten-year career at PepsiCo, in addition to leading Frito-Lay, Sankaran also served as the chief commercial officer for PepsiCo North America, Chief Customer Officer of Frito Lay, and as the Senior Vice President of Strategy for PepsiCo.

“Vivek brings a rare blend of CPG, retail, manufacturing, logistics, technology, and research and development to Albertsons Companies, all of which are key components to being a successful retailer in an Omni Channel-driven environment. Moreover, Vivek has the keen understanding that the front line is directly linked to the bottom line, and I’m confident he will inspire and engage our 270,000 associates across our stores, support offices, manufacturing facilities, and distribution centers,” said Jim Donald, the new Co-Chairman of the Board.

Related Article: Albertsons to Invest Millions in New Companies in the Grocery Sector

Albertsons Cos. operates stores across 34 states and the District of Columbia under 20 well-known banners.

Sankaran gets a three-year contract, with base pay of $1.5 million per year, plus a $10 million sign-on retention award, and a bonus structure.

“It is a great privilege to join a company that has such deep roots in American retail,” said Sankaran. “Albertsons, Safeway, Vons, Jewel Osco, Shaw’s, ACME, Tom Thumb, Randall’s, United Supermarkets,  Market Street, Pavilions, Star Market, Haggen and Carrs, all of these banners and more in the Albertsons Companies family of stores have hundreds of years of combined history. Our stores are integral to the lives of millions of customers each week. I’m excited to build on the legacies of past CEOs Bob Miller and Jim Donald who both laid a solid foundation for success and look forward to working with our associates to realize the opportunities and navigate the challenges in our evolving industry.”

Williams was most recently responsible for leading FLNA’s customer, field, and foodservice sales teams, go-to-market strategy and execution, and overseeing an organization of more than 29,000 employees.  Previously, he served as division vice president for the Eastern Division of Frito-Lay; as global SVP of PepsiCo’s Walmart business; and as head of sales for a number of PepsiCo’s largest food and beverage brands.

Williams joined PepsiCo in 2001 as part PepsiCo’s acquisition of the Quaker Oats Company, which he joined in 1997.