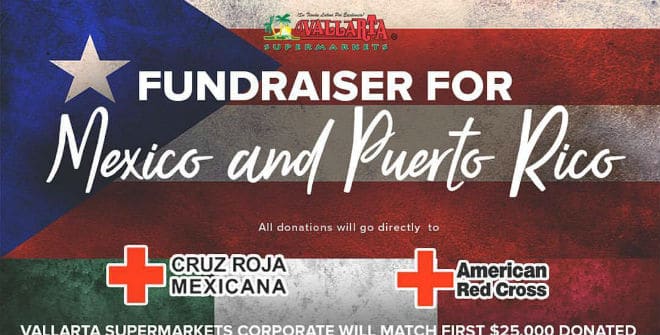 As a result of the devastating natural disasters that have impacted Mexico and Puerto Rico, supermarkets Vallarta, Compare Foods and other companies in the food industry, have started campaigns with the support of their clients to send aid to people who have been impacted or displaced.

Vallarta supermarkets in California has partnered with The Mexican Red Cross and the American Red Cross to provide relief via monetary assistance for relief supplies.  As part of this effort, Vallarta will match 2-1 customer donations up to the first $25,000.

“Mexico has suffered devastating earthquakes and many people have been injured, lost loved ones and/or their homes. Hurricane Maria was also devastating to Puerto Rico, and we are truly committed to provide assistance to those most in need,” said Rick Castillo, Director of Marketing.

“We are once again stepping up to provide assistance where it is needed, and will work alongside our customers to match donations 2-1 to help the most vulnerable communities,” added Castillo.

Related: Acts of Solidarity Arise in Areas Affected by Harvey

The customer campaign will end on September 27th.  Vallarta Supermarkets will send funds to the Mexican Red Cross and the American Red Cross to assist them in providing critical aid in the areas most devastated by the recent earthquakes in Mexico, as well as provide aid to families impacted by Hurricane Maria.

Compare Foods supermarkets in North Carolina are also collecting water, non-perishable groceries and clothing that will be shipped to people affected by the natural disasters in Oaxaca and central Mexico.

Puerto Rico is Without Power or Communications

“I am desperate now because I am not on my island and I have not been able to communicate with anyone in my family. At the moment I have no idea how my family is, how are the structures, how is my factory, I know nothing,” said Carmen Rios, co-owner of Dulzura Borincana, who is with her husband Carlos Rivera in New Jersey, nervously waiting for the first flight they can embark on to return to the town of Moca in the west of Puerto Rico.

Authorities in Puerto Rico reported that the entire island is without power and telephone communications were seriously affected.

According to Ríos, this situation is devastating for the population and businesses that will not be able to operate for who knows how long. “100 percent of the island has no electricity and therefore supermarkets do not have the service, so how long can they withstand an electric power plant?, when we will receive fuel on the island?, is a total crisis.”

Although Dulzura Borincana’s candy and snack factory has its own electric generators, Ríos said that her business, like many others, will be greatly affected because she does not know when and how many supermarkets he will be able to get and distribute their products.

Goya Foods, following Hurricane Irma’s impact through the Caribbean two weeks ago, had begun distributing 100,000 pounds of non-perishable food to the victims of the natural disaster. Now, with the devastation caused by Hurricane Maria, Goya’s help is even more valuable.

The aid provided by Goya Puerto Rico will be channeled through nonprofit organizations operating in the affected communities, both in Puerto Rico and in the rest of the Caribbean.

“We want to be sure that help will reach the people who need it the most, which is why we are channeling our help through reliable organizations that are committed to the communities they serve. We are hoping for a quick emotional and physical recovery of all those affected by this catastrophic hurricane that devastated the Caribbean,” said Carlos Unanue, president of Goya Puerto Rico.