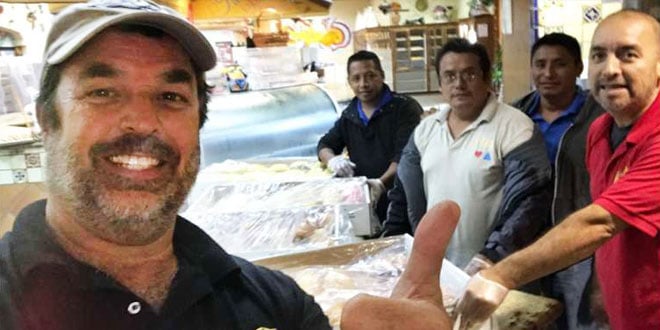 As the torrential rains of Hurricane Harvey wreaked havoc in South Texas, actions of solidarity with people affected by the floods began to emerge at every level. From the four Mexican bakers in Houston who in the middle of the storm baked thousands of loaves that later were donated to numerous shelters, to the supermarket chains and food companies that have donated millions of dollars to assist those affected by the natural disaster.

For 26 hours, as torrential rains of Hurricane Harvey wreaked havoc in South Texas, four Mexican bakers baked thousands of pieces of bread to pass the time and calm the nerves, after being forced to remain locked in El Bolillo Bakery located south of Houston, because there was no passage through the streets around it due to flooding.

Jorge Abundis, supervisor of El Bolillo Bakery, told Abasto Media the moments he lived with his fellow bakers, Javier Ponce, Regino Morales and Miguel González, who for three days lived inside the bakery until the owner managed to enter the area and to rescue them.

Amid the anguish of not being able to be with his wife and three children in his mobile home north of Houston, Abundis and his three co-workers kept busy baking sweet bread and rolls. They used 4,400 pounds of flour in the preparation of thousands of breads. “In one day I used the flour I usually spent in three days,” said the veteran baker.

Abundis said that in the area around El Bolillo Bakery in Wayside, a large number of Hispanic families live and when they managed to reopen the store on Tuesday, August 29, there was a long line of people waiting to stock up on bread and other foods.

In solidarity with the situation, the owner of El Bolillo Bakery, Kirk Michaelis, surprised by the work of his employees, decided to donate the thousands of loaves that were baked by the four Mexican bakers to several shelters, where thousands of people are living temporarily because they lost their homes and all their belongings due to torrential rains.

Although Abundis finally managed to reunite with his family and everyone was safe, his mobile home was affected by the floods. The owner of El Bolillo Bakery, in addition to donating thousands of loaves for the victims, established an account at GoFundme to help his employees who were affected by Harvey.

Solidarity of the Food Industry

Just as the El Bolillo Bakery, where all its employees are Hispanic, did its part to help the needy, large grocery stores and food companies have been working tirelessly to serve the people of South Texas and donating tons of food to help feed thousands of affected families who lost their homes to the flood.

Lisa LaBruno, Senior Vice President of Retail Operations with the Retail Industry Leaders Association, expressed the solidarity of the Retail Industry. “The retail community is consistently on the front lines in providing much needed relief for Americans dealing with disaster” and added that “Hurricane Harvey is no exception. Whether it’s providing water, medical supplies, fuel and shelter, retailers are doing everything they can to help communities rebuild in the wake of devastation. As retail faces these challenges head on, we are committed to providing hope to those that need it most.”

The following is a list of some of the big chains that in solidarity are donating money and products to the recovery process:

Walmart: The company and the Walmart Foundation donated $20 million. That amount includes $10 million focused on support of American Red Cross shelters and $2 million in support of the Hurricane Harvey Relief Fund at the Greater Houston Community Foundation. In addition, Walmart launched a customer campaign with the American Red Cross in which Walmart is matching customer donations two to one with cash and product donations of up to $10 million.

Walmart and the Walmart Foundation will also give additional cash and product donations totaling $10 million to support the Salvation Army, Feeding America, Convoy of Hope, Team Rubicon and the Hurricane Harvey Relief Fund at the Greater Houston Community Foundation, as well as other organizations assisting food distribution, sheltering and cleanup efforts.

Kroger: The supermarket chain donated $100,000 to the Houston Food Bank as part of a program that required social sharing of #KrogerCares. For each share the company donated $5 to the food bank which serves 600 hunger relief charities in 18 southeast Texas counties.

Target: Local and national disaster relief organizations received $3,500,000 from Target including American Red Cross, The Salvation Army and Team Rubicon, an organization that unites the skills and experiences of military veterans with first responders to quickly deploy emergency response teams.

Aldi: The discount grocer donated $100,000 to the American Red Cross and $50,000 to the city of Rosenberg and worked with Feeding America to distribute 1,000 disaster relief boxes.

Walgreens: Donated $200,000 to the American Red Cross and also donated food, first aid and medical equipment to the emergency shelter at the George R. Brown Convention Center in Houston.

Dollar Tree: The company is donating $500,000 of financial support as part of its efforts to support communities and associates affected by the recent storms in Texas and Louisiana.