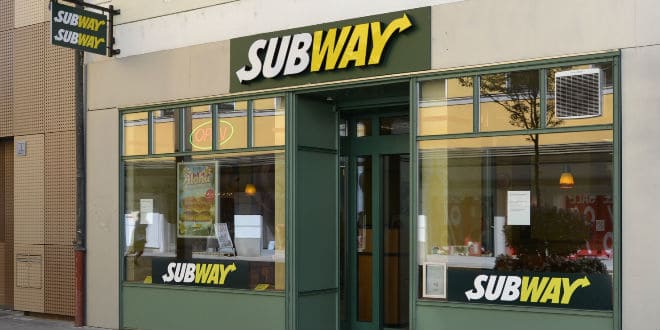 Fast food sandwich chain Subway plans to close 500 of its stores this year in the United States, continuing its plan to reduce the number of stores in the country. Last year, the chain closed another 800 restaurants.

According to Bloomberg, the franchise chain that sells sandwiches, founded more than 50 years ago, is having a hard time increasing its sales in the US, as new fast food chains emerge.

In a phone interview with Bloomberg, Suzanne Greco, the Chief Executive Officer of Subway, said “we focused in the past on restaurant count. We’re focused now on strengthening market share.” “Store count isn’t everything, it’s about growing the business.” Greco added.

Company officials said the chain’s sales fell 4.4 percent last year due to competition from new chains and other fast-food options.
“Looking forward to the next decade, we anticipate having a slightly smaller but more profitable footprint in North America and a significantly larger footprint in the rest of the world,” the company said.

Subway also launched a new loyalty program to attract more customers and encourage them to place more orders. The incentive, launched earlier this year, is $2 off any menu item for every $50 spent. The franchise chain will remodel the stores so that they look more elegant as well as adding touch screen kiosks to place orders.

“In North America we are implementing an aggressive revitalization plan, which we hope will result in the closure, consolidation or relocation of a few hundred locations by 2018,” a Subway spokesperson told CNBC.

Many of Subway’s locations are smaller compared to other fast food rivals. That’s one of the reasons there are so many of them — it’s much less expensive for a franchisee to open a Subway storefront rather than one for McDonald’s or Burger King.