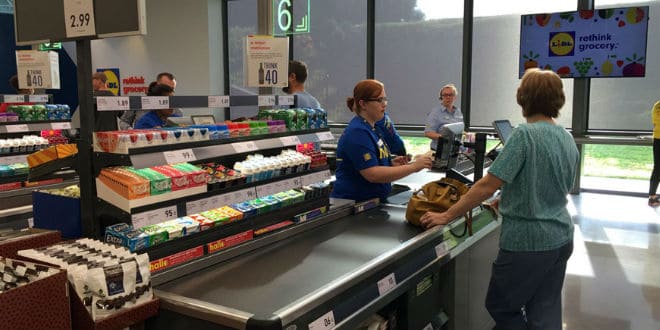 The opening of new U.S. stores by discount grocery giant Lidl was less disruptive to competing supermarkets than some grocers had originally feared, according to a study report released by Catalina, the global leader in shopper intelligence and personalized digital media.

Catalina shopper intelligence shows that nearby incumbent supermarkets lost close to 7 percent of overall sales during the first month of a Lidl store opening, but the impact on those same stores declined rapidly, falling to less than 2 percent of store sales by the fourth month.

Demographically, Hispanic and African American shoppers and larger households were much more likely than the average shopper to shift spending to Lidl. The study found no meaningful variance among income groups.

“This study demonstrates the importance of shopper analytics in helping retailers keep pace with new competitive threats and changing shopper behavior,” said Tom Corley, Chief Global Retail Officer and President of US Retail. “Retailers need to pay close attention to how new competitors are impacting their shoppers and respond with the right pricing and promotions strategies to protect and grow share.”

“It is also clear that well-recognized brands can provide a strong competitive advantage against new retail models, including Lidl, that emphasize private labels over name brands,” Corley added. “Retailers should work with their manufacturing partners to fully leverage that advantage.”

The report, “Defending Supermarket Share When Lidl Comes to Town,” represents the most in-depth, purchase-based research released to date on the effect of US Lidl store openings on competing supermarkets. The study examined shopper behavior at 83 incumbent supermarkets within three miles of 30 Lidl stores that opened in 2017.  The study tracked shopper behavior across different grocery departments and demographic groups during the first 16 weeks of a Lidl store opening.

Among detailed findings of the study:

Hispanic shoppers were far more impacted than the average shopper, reducing their purchases by 9.2 percent versus the 4.3 percent average. African-American shoppers reduced sales by 5.4 percent, while sales to Caucasians were down just 3.7 percent and Asian Americans just 3.3 percent.

Larger households with five or more people declined at 127 percent of the average. Younger shoppers were slightly more likely to reduce purchasing, while shoppers 65 years and older were impacted 25 percent less than the average.