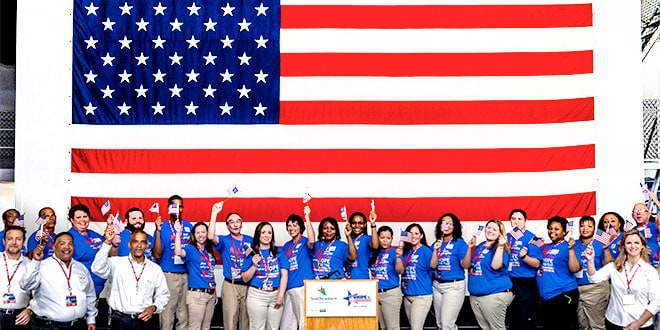 Southeastern Grocers is celebrating the Independence Day supporting the veterans in a very generous way. For the third consecutive year, all profits generated at its grocery stores on Tuesday, July 4, will be donated to Hope For The Warriors.

With more than 10 years of service, the veterans organization is a national nonprofit dedicated to restoring a sense of self, family and hope for veterans, service members and military families.

Simply by shopping at BI-LO, Harveys and Winn-Dixie on Independence Day, customers will help support those who serve and sacrifice for our nation. The more customers shop, the more they donate.

“As we celebrate our independence this Fourth of July, we will continue to honor and give thanks to our military and their families for the sacrifices they make for our nation and the world. Last year, more than $2 million dollars was donated to Hope For The Warriors during the Fourth of July campaign,” said Anthony Hucker, President and CEO (Interim) of Southeastern Grocers.

A tradition on Independence Day

“As an organization, military affiliation is integrated into the foundation of Southeastern Grocers, as 80% of surveyed associates have served or have a family member that has served our country, and we want to provide hands-on support for those who have served and made sacrifices for our nation with Hope For The Warriors,” continued Hucker.

Other ways in which customers can support the cause include:

“The #AllForHonor campaign will help us reach thousands of patriotic Americans who truly understand the sacrifices of our veterans, service members and military families. The result of last year’s campaign represented in the single largest donation to Hope For The Warriors since it was founded in 2006. That support allowed us to make a difference in the lives of over 2,250 American heroes and their families,” said Robin Kelleher, Co-Founder, President and CEO of Hope For The Warriors.

With information provided by Business Wire.