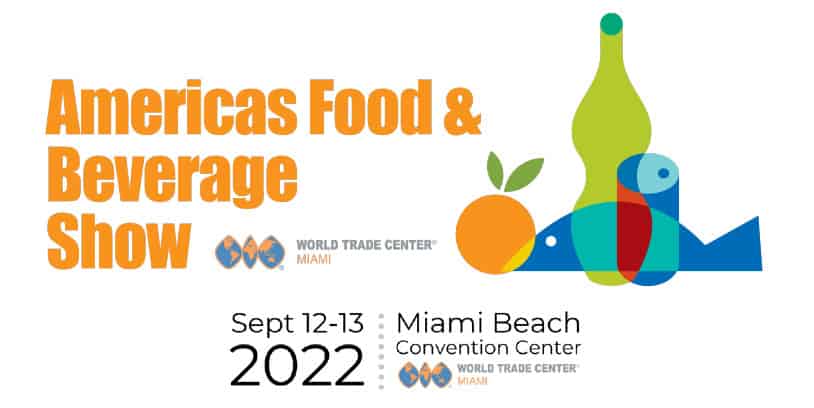 If there is one city in the United States where people of all Latin American nationalities live and do business, it is Miami. That’s why it has earned the Latin American Trade Capital name and is the home of the Americas Food and Beverage Show, the trade show that celebrates its 26th edition on September 12 and 13.

After two years of virtual events due to the Covid-19 pandemic, the trade show returns with its in-person format to the Miami Beach Convention Center.

The Americas Food and Beverage Show 2022 wants to allow all food and beverage industry retailers to participate in the event. Therefore, registration for attendees and buyers is free until August 5, and the organization will charge an entry fee of only $35 after that date.

In an interview with Abasto Media, Ivan Barrios, president and CEO of the World Trade Center Miami, and Alice Ancona, senior vice president and COO of the event organizer of the Americas Food and Beverage Show, offered details about the trade show, the excellent business opportunity and new contacts that food and beverage manufacturers, distributors and buyers will have during the two-day event.

“We currently have about 300 exhibiting companies and 375 exhibit booths. Most of these businesses are small and medium-sized companies looking for buyers from around the hemisphere and the rest of the world. We have buyers from the United States, the Caribbean, and Latin America. We also have some buyers coming from Asia and quite a few coming from Europe. So they are all looking to access new products, especially those made in the Western Hemisphere,” Barrios noted.

In 2019, the last Americas Food and Beverage Show were held in person before the pandemic. During 2020 and 2021, the event was held virtually, and finally, in September again, the in-person trade show will return.

For Barrios and Ancona, it will be their first in-person show due to both taking their roles at the World Trade Center Miami in December 2019 and January 2020, respectively.

“This is the first in-person show under a new administration,” said Alcona, who also noted that 26 years ago, Barrios helped organize the first Americas Food And Beverage held in Miami.

“So, in a way, Ivan not only helped get the show going, but now it’s the first time he’s running it completely, all under his vision, so we have a new direction and a new perspective on what we’re going to do at the show,” added Ancona.

Related Article: Retail and Trade Shows, Back to Basics

For the September event, they have several new features in store, Barrios said. They will have a food demonstration area where exhibitors can show how to use their products and how they can be cooked, the same for beverage preparation.

“We also have a new buyers program, so we are certifying many buyers coming to the show, and a buyers room will be available where traders can have one-on-one meetings during the event,” Barrios noted.

During each day of the show, there will be five educational sessions related to food services, regulations on importing and exporting food products, and the supply chain.

In addition to the innovations mentioned by the World Trade Center Miami CEO, Alcona added that at Americas Food and Beverage, “we are targeting new markets, so we have spent a good amount of time, not only trying to attract more attendance from Europe but also buyers from that region. We’ve established new partnerships in Europe to help bring a new dimension to the show, a different level of buyers, and new pavilions.”

September’s trade show will see many changes, but its organizers announced that they are already planning for the 2023 edition, which will be a totally different show.

The event is essentially aimed at medium and small industries, Barrios said. They are also offering very affordable prices so that businesses that do not have a lot of resources but have excellent products can participate as exhibitors. For their participation, they will also receive five free passes for two people each, allowing them to bring their guests.

Alcona noted a growing interest in Europe for Hispanic food and beverages and hence their interest in bringing more European buyers to the trade show. For example, she said there is growing consumption of mezcal and rum in Europe, which opens up new market possibilities for these Hispanic alcoholic beverages in the Old Continent.

To register or view the show floor and available spaces, interested parties can go to the trade event website. Exhibitors can call Roberto Berrios at (305) 871-7910 or email him at [email protected].

“We only have 45 exhibitor booths available, so if you are interested in participating in the Americas Food and Beverage Show, call Roberto Berrios,” reiterated the event director.