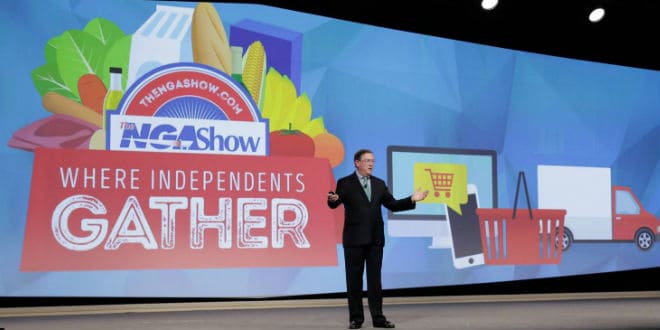 The National Grocers Association (NGA) concluded its 2018 NGA Show with a record level of retailer and wholesaler attendance that was increase by 12% from last year.

The NGA Show, held February 11 – 14 at the Mirage Hotel in Las Vegas, Nevada, was once again co-located with IGA, and featured over 350 companies on the EXPO Floor in addition to six Pavilion Partners, including the Center for Advancing Retail & Technology, North American Meat Institute, Produce Marketing Association, SNAC International, The World of Latino Cuisine, and Spanish Pavilion.

In the span of four days, over 40 educational workshops and sessions were held, including a new educational series this year titled “Tech Talks,” in which retailers heard about how artificial intelligence, robots, augmented reality, and more can help differentiate their companies.

“Independent supermarket operators and trading partners from across the country come to The NGA Show—the grocery industry’s premier event—to network with colleagues and explore new, innovative concepts to implement in store,” said Peter Larkin, president and CEO of NGA. “The growing size of the Show year after year reflects the attendees’ enthusiasm to tackle marketplace shifts head on.”

This year’s Student Case Study Competition saw 13 university student groups competing to provide a health and wellness strategy for Coborn’s.  After three days of hearing presentations, judges chose Saint Joseph’s University as the winner. The recommended strategies of this group ranged from mobile prescription refill to wellness clinics, all in an effort to meet the needs of both Baby Boomer and Millennial customers. Western Michigan University was awarded with second place in the competition.

What Are The Key Findings of The 2018 National Grocery Shoppers Survey?

The competition was just one of a number of avenues for university students to get involved at The NGA Show, which also included a mentorship program and networking opportunities with senior leaders in the independent supermarket industry.

NGA also announced a new joint venture with Clarion Events, which plans to take an equity stake in The NGA Show. This new partnership will assure many years of future growth and success for what has become one of the top trade shows in the food industry.