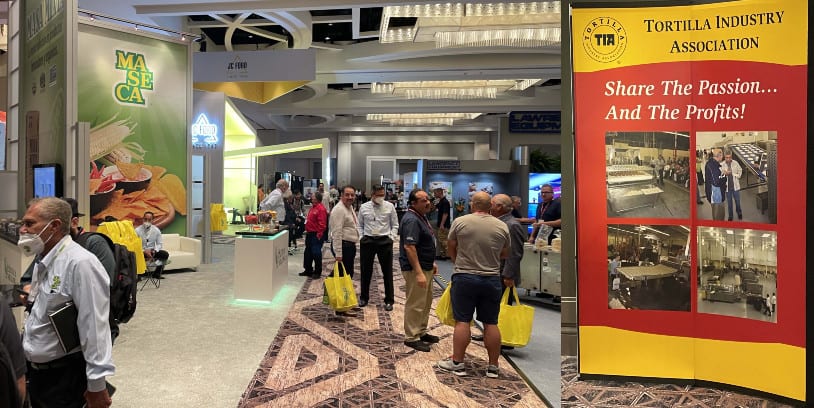 Despite the difficulties and obstacles that have arisen over the past year due to the coronavirus pandemic, the Tortilla Industry Association (TIA) successfully held its annual convention and trade show in San Antonio, Texas.

The event was held for the first time at the San Antonio Marriott Rivercenter on July 9-10, with 51 companies in the exhibit hall and hundreds of attendees gathering to learn about new industry trends, do business and have the opportunity to interact in person with industry peers.

“For TIA, we decided it was time. We couldn’t just sit around and wait for another year, be passive, and let things get better. We decided that by actually taking this action, we would help make things get better, inspire people, and know that many people miss going out and seeing their friends and colleagues. And the TIA Convention is different from many other conventions because it’s also like a reunion, where people see their friends and customers, and we want to satisfy that need. That’s what TIA is about, satisfying the need of their members,” said Jim Kabbani, CEO of TIA, in an interview with Abasto’s director, Gustavo Calabro.

The two-day TIA Convention and Trade Show featured important educational workshops presented by 11 industry experts, inductees into the TIA Hall of Fame, and awards and scholarships to students.

Related Article: Minsa Boost its Presence in the U.S. with a New Image

During the TIA Convention banquet, the organization also paid tribute to Gustavo “Gus” Gutierrez, TIA board member and CEO of Tortilla Incorporated, a pioneer of the tortilla industry in Las Vegas, who passed away last November at the age of 61, a victim of COVID-19.

As part of the tribute to Gutierrez, Kabbani announced that TIA would soon launch the Project Imagine contest.

“Project Imagine, actually, was inspired by Gus Gutierrez. He was a big music fan, a big Beatles fan, and one time we were talking about people need to really appreciate what TIA makes possible for them. They don’t realize what they would’ve missed if there was no TIA. He thought about John Lennon’s song Imagine, imagine if there was no TIA, so we started to brainstorm about that a little bit. Project Imagine is an opportunity for those in our community who are musically inclined, or who is poetic, to take John Lennon’s song, change the words, and make it about TIA, about imagining how much we would lose if we wouldn’t have each other if we wouldn’t have TIA,” Kabbani told Abasto.

On the Tortilla Industry Association’s future plans, Kabbani said they would hold the TIA European Conference, which is becoming very relevant due to the rapid growth of tortilla consumption worldwide. The European Conference will be held on September 14-15 in Belgrade, Serbia.

On October 13-14, the TIA Tech Conference will be held in Long Beach, California, and next year, the TIA Convention and Trade Show will be held at the Planet Hollywood Hotel in Las Vegas on May 18-19.

The Tortilla Industry Association CEO also told Abasto that now that everyone is returning to their normal activities, they plan to reach out to tortilla manufacturers on the East Coast. “I’m going to be visiting TIA members and non-members in different regions of the country. I’m going to their factories and seeing masa distributors and find out what we can do to support them better, what kind of educational information would be helpful to them,” Kabbani said.

At the TIA Convention & Trade Show Banquet in San Antonio, the newest inductees into the TIA Hall of Fame were announced:

Guillermo and Patricia Gama, El Mirasol Tortilla Factory. Guillermo Gama is a native of Tlaxmalac, Guerrero, Mexico. He founded the first tortilla factory in Florida in 1989; the El Mirasol factory is headquartered in Plant City, near Tampa. The business, which he established with the support of his wife Patricia, is now run by the third generation of his family.

Andy Caridis, Heat & Control. Andy recently celebrated his 100th birthday and is one of the pioneers in food production automation technology. At the age of 30, Andy and his friends created the Heat & Control company, and his work has been highlighted as integral to the advancement of the food sector of the global manufacturing industry. It has helped companies large and small grow, adapt and improve significantly.

Erasmo Ponce, Tortilleria Chinantla Inc. Ponce is a native of Chinantla, Puebla, Mexico, and immigrated to New York in 1989. Three years later, he purchased tortilla manufacturing equipment and started his business in Brooklyn. Today, his factory is located in Newark, New Jersey.

Also, this year, TIA was able to present, with the support of its sponsors, special recognition to Andy Caridis for his lifetime of innovation in the food industry and four educational scholarships of $1,000 each to Alejandro Heredia, Abigail Gilbert, Adrian Bernal Canales, and Olivia Braulik.