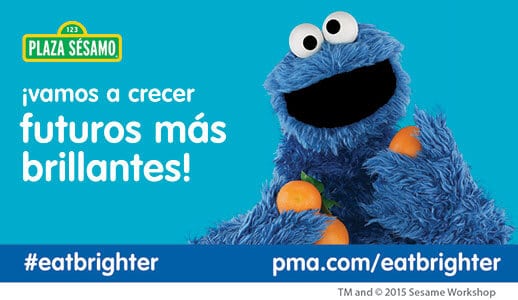 Through various initiatives and strategies, PMA (Produce Marketing Association) has contributed to the successful growth of the fresh food industry, boosting the consumption of vegetables and fruits worldwide, and one of these campaigns is to eat brighter! ™ (¡Ponte color a tu mesa! ™). This program consists of a marketing plan that helps businesses increase fresh produce sales by using, without royalty, characters emblematic of Sesame Street, thus promoting the consumption of fresh produce among children.

According to Cathy Burns, president of the PMA, this strategy, which was implemented in early 2015 in association with the Partnership for a Healthier America and Sesame Workshop, and which already has more than 30,000 stores participants, has had extraordinary results, as 75% of businesses have reported an increase in the sale of products from the program.

She said that in the second quarter of last year companies that are linked to the program had a 3% growth in product sales related to eat brighter!, while in the first three quarters of 2015 the increase was 5.3% for long-term participants.

Some participants have had an 11% growth in sales.

According to a recent survey, some participants have had an 11% growth in sales,”said Burns.

According to the PMA, a global organization that represents the entire supply chain and has members in more than 42 countries, with payment of the registration fee, merchants have access to the images of Sesame Street’s main characters and can use the marketing tool kit consisting of the images in their product packaging, point of sale materials, and much more.

“PMA, Partner for a Healthier America and Sesame Workshop have worked together to make this program accessible to all companies regardless of their size. The investment for using licensed images of recognizable characters in their marketing strategies usually costs millions of dollars ” Burns said, explaining that PMA members have the opportunity to use all the tools of the program for less than $1,000.

She also said that the focus of this campaign is important to the Hispanic market, for which a campaign has been designed in Spanish, which will be promoted in association with Abasto Magazine.

Other initiatives of the PMA

She highlighted the recent strategic alliance with the Association of Entertainment Marketing Resources (ERMA), which brings together industry professionals and entertainment marketing to showcase fresh products in television programs, movies and online entertainment.

Likewise, she highlighted the success of the last Fresh Summit Convention and Exhibition, organized by PMA (Produce Marketing Association) where 19,332 attendees from 63 countries participated.

The event, which took place from October 23 to 25 at the Georgia World Congress Center in Atlanta, exceeded the record attendance of 18,284 visitors that was recorded in 2010, when Fresh Summit was held in Orlando, Florida.

In this edition 3,380 buyers were present, the highest number on the East Coast since 2011.