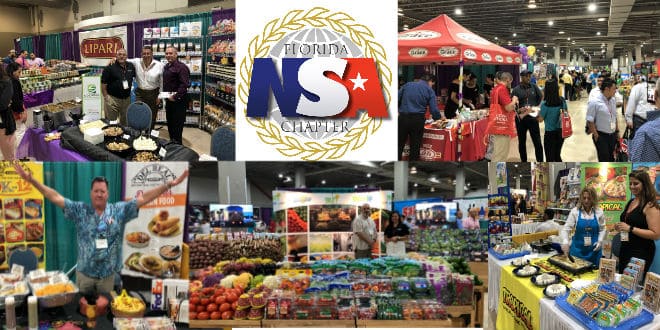 The annual NSA Florida Food Trade show, which was held Wednesday in Miami, had a 15 percent increase in the number of companies participating in the event organized by the independent Hispanic supermarket association.

The one-day food and beverage trade show organized by the National Supermarket Association, Florida Chapter, was held at the Miami Airport Convention Center, where about a hundred food and beverage manufacturers and distributors exhibited their products and did business in the midst of a festive Hispanic atmosphere.

“This year we had ten new companies that are supporting the Association, for example, from the north we brought Lipari Foods who are supporting us with five booths this year and have committed to bringing ten more next year,” Raifiz Vargas, president of the NSA Florida, told Abasto.

The NSA Florida held the food trade show in association with Sherwood Food Distributors and they are taking advantage of the opportunity given by the absence of the show previously held in Miami by the Associated Grocers.

“We are growing, and we have taken advantage that the AG show is no longer being made here and we are now creating a show for Miami, with new products that represent the new trends in organic and healthier foods,” said Román Jiménez, member of the NSA Florida Board and who also manages a Bravo supermarket in Hollywood, north of Miami.

Related Article: The NSA Strengthens Relationship With The Dominican Government

Jiménez stressed that independent supermarkets continue to strengthen in Florida due to population growth and its diversity, although he acknowledged that they also face great competition from large supermarket chains, but said Hispanic stores have the perfect formula to keep their clientele.

“We make sure to maintain the quality of our products and our services, we are preparing ourselves because nobody knows the Latin customer like us, this makes a difference because we understand what they are looking for, we know what purchases they made in their countries and we can offer them those products in our stores. Then, those companies that work more at a corporate level, find it more difficult to have the flexibility that an independent supermarket has,” Jiménez concluded.

Photo Gallery of the 2019 NSA Florida Trade Show in Miami