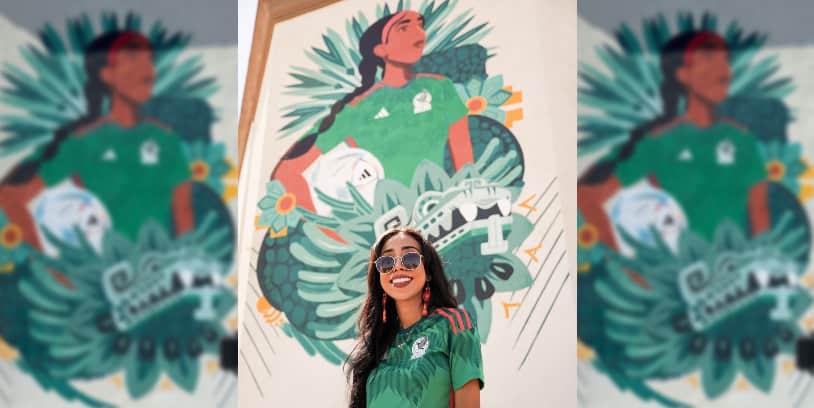 In celebration of the much-anticipated FIFA World Cup Qatar 2022 and Mexico’s team preparatory games, adidas commissioned local Latina designer and visual artist Marlene Solorio to design and paint a mural on the wall of Northgate González Market in her hometown of Bell.

At the mural unveiling, Co-President of Northgate Market Miguel González spoke about their pride in their Mexican roots and why staying connected to the rich heritage and the community’s passion for soccer is so important.

“Soccer and culture go hand in hand for our communities,” Gonzalez said. “For more than 40 years, Northgate Market has brought people together to watch soccer matches. It is not uncommon to see friends of rival teams enjoy a bowl of guacamole, tortilla chips, and chicharrones, all while watching a game together.”

Northgate Market’s “Por el Fútbol” campaign is predominantly a digital marketing campaign with experiential elements like Panini Trading events and a World Cup final viewing party. Also, the stores will have special offers for customers with partner brands throughout October and November.

The artist Marlene Solorio, who was commissioned by adidas to paint the mural, shared her inspiration to feature a young Latina girl playing soccer to motivate local children with a message that they can be anything they to be.

“I did this mural in about five days,” Solorio said in an interview with Channel 4 NBC Los Angeles. “Yes, I pulled some 12-hour shifts, but it’s all worth it. It is so worth it to be back here in my hometown doing this huge project. It is a big accomplishment for me!”

The mural is located at 6801 S. Atlantic Avenue in the City of Bell, where the muralist was raised. Also in attendance were the Mayor of Bell, Monica Arroyo, and members of the city council and chamber of commerce.