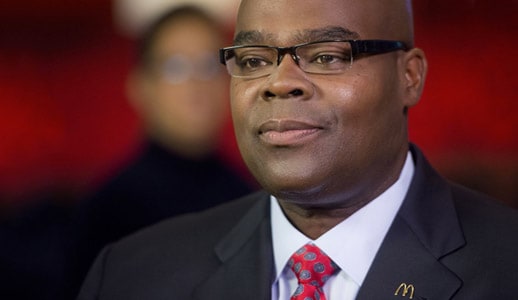 The CEO of McDonalds, Don Thompson, submitted his resignation in response to the weaker sales the chain experienced in recent months.

Thompson, who has been CEO for two-and-a-half years, will be replaced by Steve Easterbrook, its chief brand officer. Easterbrook has led efforts related to marketing and menus and served as president of McDonald’s Europe since 2013

Thompson, 51, had been president of McDonalds in America until he assumed the global leadership of the group in July 2012 with the challenge of continuing with nearly nine years of rising sales at established restaurants.

However, in September of that year, the company reported a drop in sales while trying to keep customers by offering different options in the menu, all in a difficult context in which political and economic destabilization in Europe and the fear in regards to the food safety incidents of McDonalds in China.

The company reported a drop in quarterly sales of 7% and a decrease of 21% in profits. For all of 2014, when a scandal broke in relation to contaminated meat in Asia which also affected their income, sales fell 2% and earnings fell 15%.

“Steve is a strong and experienced executive who led successful business units in the UK and Europe. The Board is confident that he can effectively lead the company towards better financial and operational performance,” the company said in a statement.

McDonald’s shares have fallen 8% in the last three years, a period when rivals like Wendy’s and Yum! A brand, which operates Pizza Hut and Kentucky Fried Chicken, has seen an increase in their actions.

McDonalds said Thompson will retire on March 1 after almost 25 years with the company. Thompson was the first African-American who led the company since it was founded in 1955.

“It’s hard to say goodbye to the Mc family, but there is a time for everything,” Thompson said in a statement.