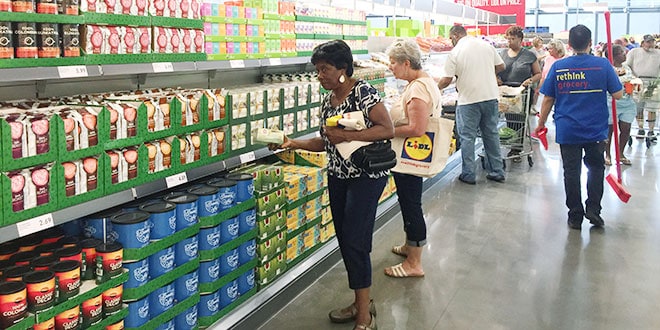 This figure is based on a comparison of products sold in the top supermarkets in the nation. However, in a survey by Kantar Retail in the United Kingdom, it was found that Lidl was on average 15% cheaper than its main competitor, Asda.

This is a big difference with what they hope to achieve in the U.S., which is to be 50% cheaper than its competitors.

Lidl plans to clearly differentiate themselves from their competitor (Aldi) with their 2,000 square foot stores. By offering a larger shopping experience than other “hard discount” grocery stores, Lidl is set on being the main destination for shoppers looking to fill their weekly groceries, but also a destination for those looking to save money on their purchases.

Contrary to popular misconceptions, Lidl’s main buyers will position themselves more towards a mid-market buyer, which is consistent with the approach of the grocery store in the United States and other markets.

Related: Lidl Debuts in The U.S. And Surprises Their Customers

It’s expected by the year 2023 that Lidl will have 630 stores opened in the United States, with a clear focus on suburban markets and local stores.

Lidl could generate close to $700 million in sales by the end of 2018, growing to $8,800 million by 2023, as customers begin to move away from other supermarket formats in order to become loyal in “hard discount.”