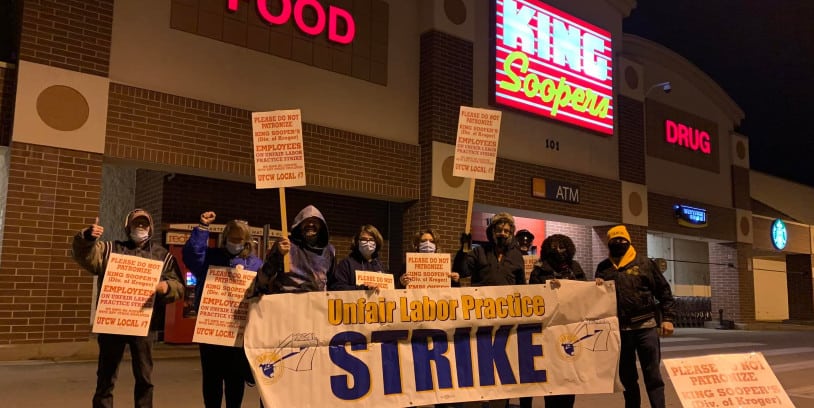 In a press release, King Soopers and City Market called the UFCW Local 7 union’s decision to go on strike “reckless and self-serving, without regard for the implications for associates and Colorado residents.”

The worker strike will occur at 77 King Soopers stores in the Denver area and ten other Colorado Springs stores, UFCW Local 7, which represents about 17,000 employees of the Kroger-owned grocery chain.

“UFCW Local 7 members working at King Soopers are fed up with the company’s unfair labor practices and will strike beginning January 12. This is a direct result of the company’s bad faith at the bargaining table,” the union said in a statement.

For its part, the supermarket chain said its stores would remain open to serve customers.

On Tuesday, King Soopers/City Market proposed, by email, a last, best, and final offer to UFCW Local 7. Over the next three years, the investment of $170 million includes wage investments plus ratification bonuses for all associates. The company also proposed an additional investment in healthcare benefits that would result in zero impact to associates current healthcare premiums based upon the current projections – plans that have not increased in 12 years if this agreement is ratified.

“Local 7 is putting politics before people and preventing us from putting more money in our associates’ pockets,” said Joe Kelley, president of King Soopers and City Market. “It’s time for Kim Cordova to put our associates, her members, first instead of denying them the opportunity to vote on this unprecedented investment. Creating more disruption for our associates, their families, and Coloradans rather than negotiating for a peaceful resolution is irresponsible and undemocratic.”

In turn, Kim Cordova, president of UFCW Local 7, responded in a statement that “the company’s ‘last, best, and final offer, in many ways, is worse than its previous offers. King Soopers, despite providing certain information, has failed to respond to critical requests and data concerning the wage, health, and safety matters that are central to these negotiations.”

Córdova added that “We strike because it has become clear this is the only way to get what is fair, just, and equitable for the grocery workers who have risked their lives every day just by showing up to work during the pandemic.”

The union said the workers would be on strike for the next three weeks, with groups demonstrating outside the entrance to King Soopers supermarkets, asking customers to support them and shop at other stores.