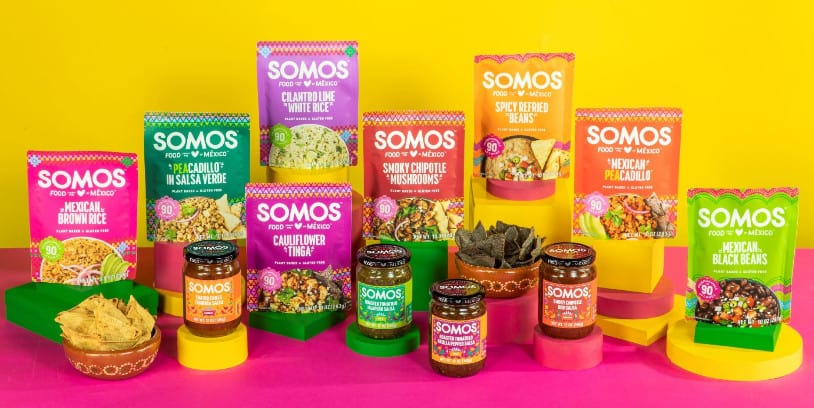 How are the main ingredients of authentic Mexican food prepared? Corn is stone ground and nixtamalized, beans are slow-cooked, and vegetables are fire-roasted to prepare sauces. Using these processes, Somos, a new brand of true Mexican plant-based food, was created.

The company was created by the founder of KIND Snacks, Daniel Lubetzky, who partnered with two other former KIND executives, Miguel Leal and Rodrigo Zuloaga, all three born and raised in Mexico.

Somos’ purpose is to replace the fake Mexican food that predominates in U.S. pantries with real Mexican food, made in Mexico, the way Mexicans make it, said the company.

“Until now, Americans have had to dine out to enjoy a real Mexican meal. At home, options have been limited to foods that don’t actually exist in Mexico, like fluorescent molded hard-shell yellow corn tortillas. Somos was created using inspiration from family recipes that have been passed down through generations and will introduce people to true Mexican cocina staples,” said Somos founder, and KIND Snacks founder Daniel Lubetzky.

According to the company, Somos is produced entirely in Mexico and sources most of its ingredients from local Mexican family farms.

All foods are plant-based, gluten-free, and non-GMO, providing a refreshing alternative to what is currently on the shelves. Somos’ pouches are microwavable and ready to heat and eat in 90 seconds (or to be prepared via stovetop), leaving more time for soaking up time together post-dinner – a tradition that Mexicans call ‘sobremesa.’

Related Article: Statistics Behind The Insatiable Appetite for Mexican Food in the U.S.

“While Americans often think of Mexican as heavy on meat, cheese, and greasy sauces, real Mexican food celebrates the natural vegetables, grains, and legumes of its diverse geographies,” said Miguel Leal, co-founder and CEO of the company. “Somos is committed to preserving the integrity of these ingredients and preparing our foods as close to the traditional way as possible, helping consumers make and enjoy delicious meals that are clean, sophisticated, and full of flavor,” added Leal.

Somos is now taking wholesale orders for its inaugural product range of shelf-stable, slow-cooked Mexican foods for quickly preparing dishes like tacos, tostadas, nachos, or chilaquiles the Mexican way. The brand offers a variety of rice, beans, tortilla chips, salsas, and plant-based entrees – including smoky chipotle mushrooms; cauliflower tinga; and two kinds of ‘pea-cadillo,’ Somos’ own plant-based alternative to ground beef – which can all be mixed and matched to create tasty, homemade Mexican meals.

CNBC reported that Somos is positioning itself as a brand that doesn’t sell Americanized Mexican food but instead uses traditional cooking techniques to draw in consumers and create better-tasting options. The brand is also nixtamalizing its corn, a process that involves cooking dried corn in an alkaline solution to improve its flavor and increase its nutritional value.

On its website, Somos has already begun selling its sauces and chips. They hope to have their products on grocery store shelves by January 2022.