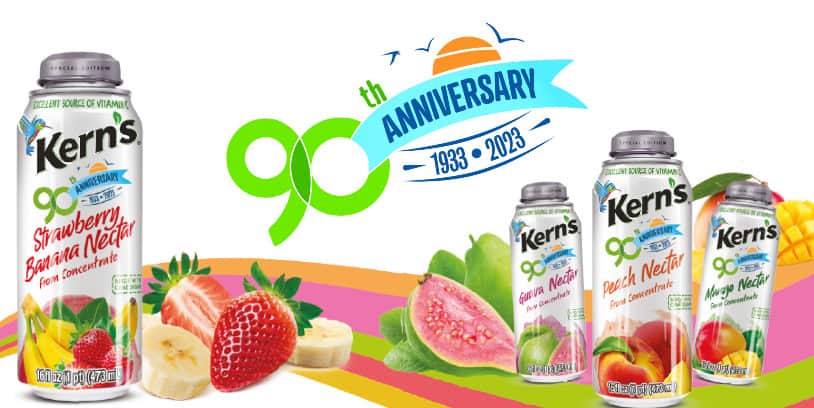 With a renewed brand image, modern and exclusive packaging, and delicious natural fruit flavors, Kern’s nectars are celebrating 90 years in the market.

Although the history of Kern’s Beverages began in Santa Ana, California, in 1889, achieving exponential growth during the 1920s, it was in the 1930s that they began producing fresh flavored beverages, officially incorporating the Kern’s Nectars division in 1932. These drinks were an instant hit in California and soon began to spread throughout the United States and Latin America.

The brand’s success continued, and in 1985 the company was acquired by Nestlé, which continued to develop it and take it to new markets until it was sold to Stremicks Heritage Foods in 2004.

Over time, the Kern’s nectar brand established a strong quality, taste, and freshness tradition. These values motivated Mexican company Jumex to integrate it as a subsidiary into its business portfolio in 2013.

“Historically, Jumex has been characterized by offering high-quality products. It works every day to get the best out of fruit and bring to the tables of every family a wide variety of world-class juices, nectars, and beverages. So Kern’s fit best with our philosophy and values, bringing diversity to our beverage portfolio with a greater focus on the American target,” said the Mexican beverage company.

Jumex’s dominance in the Hispanic beverage market allowed them to boost further the commercialization of Kern’s nectars, which were already backed by the high quality of the product. Likewise, they set themselves the task of innovating the nectar portfolio.

The process began in 2014, eliminating the HFCS seal due to a reformulation that replaced this syrup with cane sugar. Likewise, the company made a new design to give more life to the product through unique colors and fruits.

Continuing with the innovation process, in 2016, Kern’s made a new image change. The new look included a renovated brand logo by adding vibrant colored stripes and changing illustrated fruits for real fruits used in the portfolio of nectars such as guava, peach, apricot, mango, pineapple, strawberry banana, and strawberry.

As it celebrates its 90th anniversary, Kern’s seeks to increase the demand for its nectars, completely renewing the brand’s image through a fresher presentation with a predominantly white color that gives it a more modern touch.

As part of its new presentation, the characteristic Lata Botella® was incorporated, an exclusive Jumex container design that allows you to enjoy your favorite nectar wherever you go and at any time of the day thanks to its resealable lid.

But what distinguishes Kern’s nectars is the freshness of the flavor of its beverages. The best fruits from different regions in Mexico are selected to make the nectars: mango is harvested in Oaxaca, Chiapas, and the Pacific of Nayarit. Strawberries come from Michoacán. Guava is from Aguascalientes, Zacatecas, and Michoacán, and Mexican peaches come from Zacatecas and Chihuahua.

Kern’s nectars are produced at the Jumex production plant in Mexicali with the highest quality and safety standards. They are certified with the SQF Quality standard, and no artificial flavors are used in their preparation.

Also, as part of its 90th-anniversary celebration, the brand is conducting an aggressive national promotional execution, with development efforts in all 50 states, working with various supermarket chains.

During this holiday season, when Hispanic families enjoy their favorite typical dishes, Kern’s nectars are ideal due to their freshness and high quality, making each meal a unique experience thanks to their authentic fruit flavors.