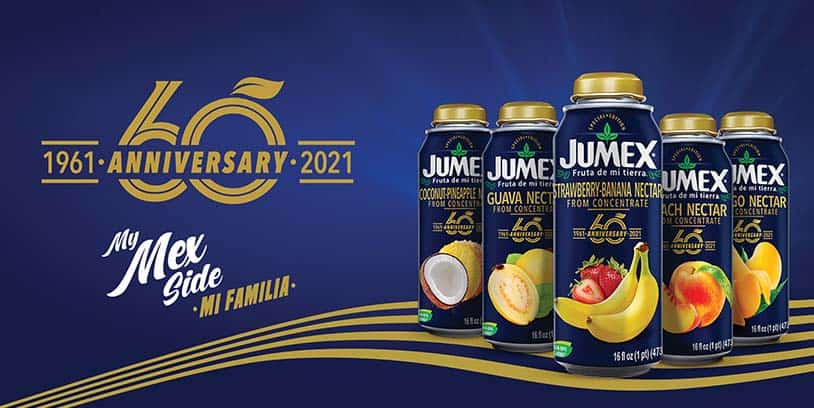 This year Grupo Jumex celebrates its 60th anniversary. Six decades of being close to families around the world. Of bringing all the best of the countryside beyond our borders.

The history of Grupo Jumex began with the vision of Don Eugenio López Rodea, who managed to bottle the first apple nectar in a can of 350-milliliter on June 6, 1961.

With the support of his family and community, Jumex was born with only 20 workers.

Sixty years later, the company has established itself as the preferred brand of juices and beverages among Mexicans. It also has a presence in more than 45 countries, bringing the best of the Mexican countryside to the whole world.

“At Grupo Mex we are always looking for Excellence to leave our mark. We are celebrating 60 years of growing together and together we will celebrate more successes to come.”

In the United States, Jumex is the number one selling brand in the nectar category. To celebrate its 60th anniversary, Jumex will be launching a collectible edition of its iconic can-bottle, alluding to its 60 years of history, for Mango, Strawberry-Banana, Peach, and Guava, which are the favorite fruits of Hispanic consumers.

In the coming months, Jumex will be expanding its portfolio in the United States in response to new trends for healthier products. They will enter the 100% juice category with their Unico brand, juices with no preservatives and no added sugar, with blends such as Orange-Carrot and Green Juice.

The Mexican company also wants to get closer to Hispanic consumers. To this end, it will be launching a new campaign for the brand called “Jumex, Fruta de mi Tierra,” which appeals to nostalgia, tradition, naturalness, and authenticity of the brand, which will be seen in its packaging with a commemorative edition, at the point of sale with displays and in its digital media.

Grupo Jumex is a company that daily gives everything for its employees, for its people, which is its essence.

According to the company, its products would not be the same if they were not made with the passion and dedication of all producers. Every day they learn from them, from their effort, their love for the field, which is where the magic begins.

Grupo Jumex has a great commitment with its land and even more with those who work it. “Our family inspires us, and with that same agility and creativity, we constantly develop better ways to bring the freshness and nutrition of fruits to every moment of your day.”