Home » News » Interview with Fresco y Más Director of Operations: What has Made Sergio Benítez Successful? 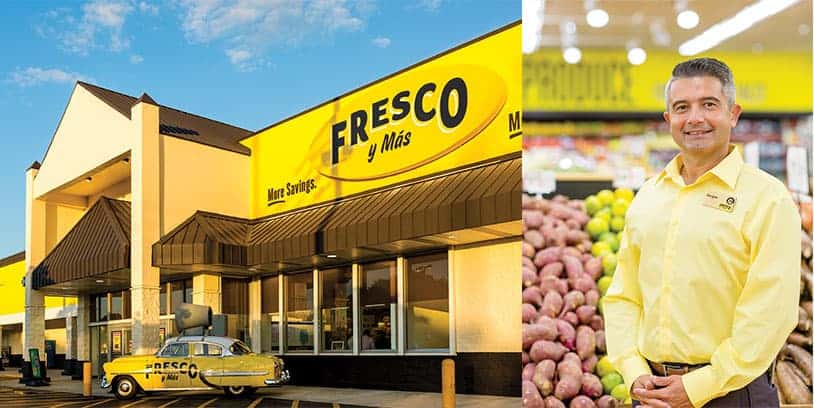 A format aimed at the Hispanic consumer has been the formula for success for the Fresco y Más supermarket chain, which in its fifth year in Florida now has 27 stores. A key-person in the growth of this chain of stores, owned by Southeastern Grocers, is its Director of Operations, Sergio Benítez.

This industry veteran has been working for Southeastern Grocers for 31 years. Benítez initially started as a bagger at a Winn-Dixie supermarket on Flagler Street when he had only been living in the U.S. for two months.

In an interview with Abasto Magazine, Benítez recounted his life and career in the supermarket industry, which began as a teenager and, a few decades later, led him to become a leader in the operations of the Hispanic grocery chain Fresco y Más.

Sergio Benítez was born in the province of Holguin in Cuba and, in his early teens, moved with his parents to Spain, where he attended high school. Upon graduating in 1988, he traveled to Miami, entered college, and began learning English.

Two months after living in Miami, Benítez recalls, he accompanied one of his aunts to the Winn-Dixie supermarket on Flagler Street to buy groceries.  He took the opportunity to ask the store manager for a job and was hired as a bagger.

“While working, I was able to study my entire degree and graduated from Florida International University. I have a Bachelor of Science degree,” Benítez said.

But at that point, he realized that working full-time in an office wasn’t what he wanted. “I saw an opportunity to turn my job into a career and realized I had a real passion for retail, that I enjoyed working helping people,” Benítez said.

During his professional growth, Benítez worked in virtually every supermarket department before he took the position of Director of Operations at Fresco y Más. He rose to assistant manager, then co-manager, and worked with the district manager as a supervisor. Finally, in 2001 was named manager of one of the Winn-Dixie stores in South Miami. “In nine months, I was promoted three times and ended up at the Winn-Dixie supermarket in Key Biscayne, where I was the store manager for 11 years.”

Benítez said that being bilingual, bicultural, and knowing the culture of two continents has helped him advance in his retail career. But he says the secret to success in his work is his “constant search for perfection.”

“I not only want to be successful for myself, but everyone around me. So I always try to do everything I can for my team to help them succeed because, at the end of the day, our success as a team is what makes our business better,” Benítez emphasized.

That formula for success served him well when Southeastern Grocers asked him to be part of the team that launched the Fresco y Más store in Hialeah in 2016. In 2018 Benítez was named director of operations for the Hispanic grocery chain with 27 stores, mainly in South Florida.

“Having the opportunity to be the COO of Fresco y Más represents for me to bring the experiences from where I come from. It has given me a unique opportunity to be an advocate for my culture and my community in the country that adopted me,” said Benítez.

The COO emphasized that the success of Fresco y Más is due to a straightforward strategy: “We listen to our customers, provide an authentic Hispanic shopping experience that reflects the desires of our local community and is spoken in your language.

Benítez said they learned a lot after a year of sudden and unexpected changes regarding the coronavirus pandemic. “Today’s customers want a safe environment to shop, and they want brands they trust. At Fresco y Más, we also offer them more opportunities in e-commerce. This is what we are promoting in 2021.”

Regarding the likelihood of opening new stores soon, Benítez declined to comment. But with the growing demand for Hispanic products, it would not be a surprise if Southeastern Grocers continues to expand its Fresco y Más store chain to other regions in and out of Florida.