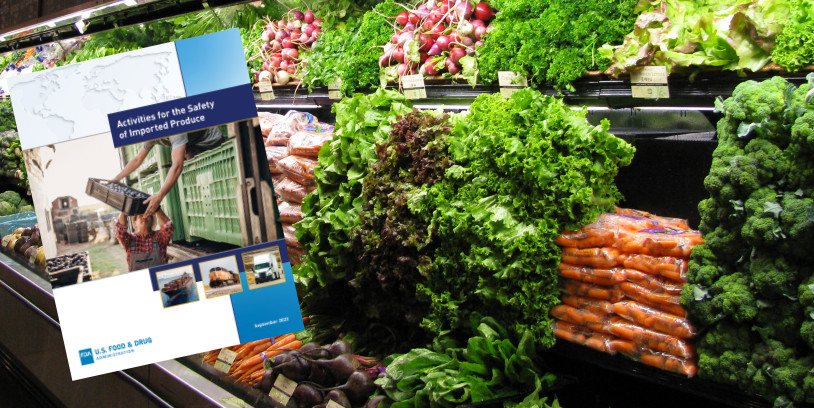 A lot of the food that American consumers eat and serve their families is imported from other countries. Of the foods subject to oversight by the U.S. Food and Drug Administration, fresh produce and seafood have the greatest percentage of imports at 55%, 32%, and 94%, respectively.

Importantly, the FDA’s public health mandate does not distinguish between foods produced in the U.S. and those produced in other nations. We require all food that reaches U.S. consumers to meet the same safety standards.

That said, there are unique challenges associated with the oversight of imported food. Global food supply chains are complex, with varying food safety systems and differing regulatory oversight among the more than 200 countries and territories exporting food to the U.S.

The FDA has tools to meet these challenges and ensure parity in overseeing domestic and imported foods. The Strategy for the Safety of Imported Food (Import Strategy), released in 2019, outlines how the agency is building on current authorities under the Food Safety Modernization Act (FSMA) and taking new approaches with imported foods, as described in the New Era of Smarter Food Safety.

Recognizing that certain commodities, such as produce and seafood, represent a significant proportion of U.S. imports, the FDA conducts a range of activities under its Import Strategy to ensure the safety of all products exported to the U.S., including fresh fruit and vegetables.

Overview of Activities for the Safety of Imported Produce

Recently, the FDA released its Overview of Activities for the Safety of Imported Produce (the Overview), which is organized according to the four goals introduced in the 2019 Import Strategy:

Building on FSMA and the New Era of Smarter Food Safety

The activities outlined in the Overview align with and build on existing efforts to keep foods safe. Under FSMA, the Produce Safety Rule establishes standards for domestic farms and international growers who export produce to the U.S. The Foreign Supplier Verification Programs rule under FSMA requires importers to perform risk-based activities to verify the safe production of the foods they bring into the U.S.

The FDA’s New Era of Smarter Food Safety uses new technologies, tools, and approaches to implement and build on FSMA. Many of the activities outlined in the 2019 Import Strategy related to imported produce are augmented by approaches in the New Era blueprint, especially using new data sources and analysis to optimize the FDA’s resources for maximum food safety and public health protection.

The Overview will help stakeholders understand the breadth of activities the agency is taking in the face of increasingly complex, worldwide supply chains to help ensure that imported produce is safe to eat.

The FDA is also working on an overview of its actions to ensure the safety of imported seafood, which will be shared once available.

Parity in regulatory oversight in the domestic and foreign arenas is essential to ensure that consumers can have confidence in the safety of their food, no matter where in the world it is produced.

Food safety in the 21st Century will continue to be underpinned by approaches to prevent foodborne illness that leverage data and analytics, technology-enabled traceability, and strong global partnerships.

The article was written by: Donald Prater, Associate Commissioner for Imported Food Safety, and Julie Moss, Director of the Office of International Engagement in the Center for Food Safety and Applied Nutrition.