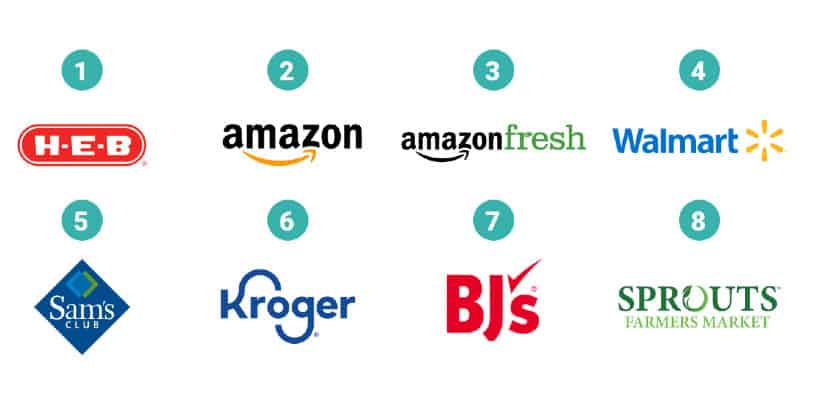 The study ranked Walmart fourth and Sam’s Club fifth. Kroger, BJ’s, and Sprouts had the following highest scores in the Retailer Preference Index, with all three finishing in the top tercile.

“H-E-B’s impressive performance proves that it’s possible to compete and win against Amazon when it comes to grocery e-commerce. Their success offers mid-size and regional retailers a roadmap on how to succeed online,” said Grant Steadman, President of North America for dunnhumby.

“H-E-B’s eCommerce journey goes back to 2015 when they first started with curbside pick-up, and they have since built up a powerful online ecosystem. The combination of a simple and easy-to-use shopping experience with a fantastic emotional connection with customers shows how grocers can thrive in this multichannel landscape,” added Steadman.

According to dunnhumby, the overall RPI rankings are the result of a consumer survey-informed statistical model that predicts how retailers execute on the customer needs that matter most for driving eCommerce performance and emotional bonds with online shoppers.

The eCommerce RPI methodology calculates eCommerce performance through a composite score of Change in Web Visits (2019 to 2021) from SimilarWeb, Share of Wallet Online, and Online Penetration of a Retailer’s Total Shopper Base.

Retailers’ preference driver and emotional connection scores were gathered from a customized, online survey of 3,000 U.S. households that shopped online at least once in the 30 days before being surveyed. The five drivers of customer preference for eCommerce are: 1) owned digital asset usage, 2) ease and reliability, 3) substitutes, 4) product, 5) price.

Key Findings From the Study: