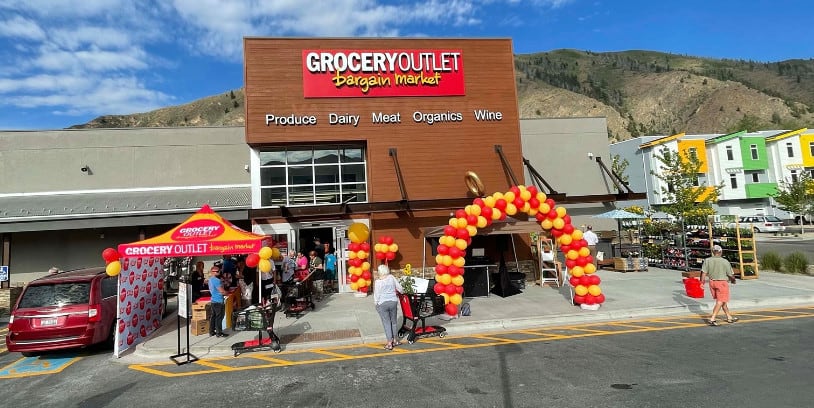 Grocery Outlet continues its national expansion by opening its 400th store and newest location in Hailey, Idaho. The grand opening caps off the momentous year as Grocery Outlet celebrates 75 years in business, a second anniversary as a public company, and the 11th annual Independence from Hunger Campaign.

Located at 615 N Main St. in Hailey, Idaho, south of the Sun Valley ski resort and east of Boise, the newest location is run by independent operator Shane Anderson.

Anderson is a Grocery Outlet veteran who previously worked alongside his daughter and son-in-law, serving as a general manager in their store location. The Hailey store continues Grocery Outlet’s annual new store growth of 10%, adding roughly 35 new stores each year.

“We are incredibly proud to celebrate the opening of our 400th store, a momentous number 75 years in the making,” said Grocery Outlet’s CEO Eric Lindberg.

“Since our founding, the company has built on the core value of ‘touching lives for the better,’ and today, we are proud to play a part in 400 communities across the U.S. When you shop at a Grocery Outlet store, you are shopping local and supporting entrepreneurs within your own community. I’d like to congratulate Shane Anderson, along with all of our IOs across the country, for providing a treasure hunt shopping experience for all of our bargain-minded customers,” added Lindberg.

The announcement of the 400th store comes as the grocery retailer celebrates its 75th anniversary. A diamond commemoration, across all of Grocery Outlet stores, customers can expect to see “diamond deals” of up to 75% off select items, as well as throwback bargain deals and highlights of some of the Company’s most unique bargain, buys from throughout the years.

This year, the company celebrates its second anniversary as a public company after joining Nasdaq under the ticker symbol “GO” on June 20, 2019. Additionally, Grocery Outlet kicked off its 11th annual Independence from Hunger food bank donation campaign on June 23, which has raised more than $11 million for local food banks across the country to date.

For 75 years, Grocery Outlet, an extreme-value grocery retailer based in Emeryville, California, has offered customers big savings on brand-name products. The company has 400 locations throughout California, Idaho, Nevada, Oregon, Pennsylvania, and Washington. Stores are owned by Independent Operators based in the communities they serve.