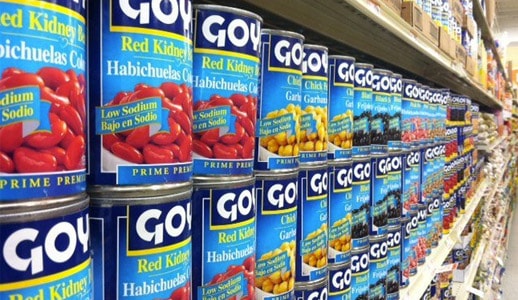 Goya Foods, the largest Hispanic-owned food company in the United States, opened a new distribution center in Georgia to promote the expansion of its business in the Southeast.

The new plant spreads over 150,000 square feet, and the current space allows for future expansion of approximately 50,000 square feet. Along with the opening of the center, that was held this past Wednesday, the company made ​​a donation of 1,000 pounds of food to the St. Vincent de Paul’s Food Pantry headquartered in Atlanta, GA, as part of its ongoing commitment to the community.

“We are very pleased and excited with the opening of our new distribution center and the great achievement it represents for the history of our company,” said Frank Unanue, president of Goya Foods in Florida. “This new facility gives us the opportunity to reach the Southeast sectors, which allows Goya reach more consumers and offer a greater variety of products.”

The new distribution center is part of Goya’s global expansion plan and sustains consumer demand for the company.

In April, 2014 Goya opened its new state of the art plant in Houston, Texas, with 350,000 square feet which serves as the main center for manufacturing and distribution for Goya’s new line of healthy beans of reduced sodium and organic which produces 1,000 cans of beans per minute.

Besides the new distribution center in McDonough, Georgia, the company will open two new manufacturing, production and distribution centers in California and New Jersey, as part of an investment of $ 250 million to reach new consumers and strengthen brand through United States and abroad.