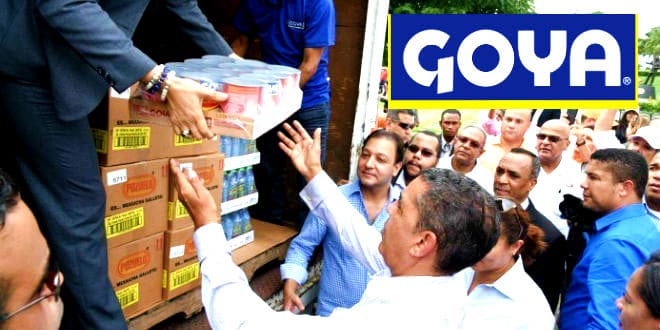 America’s largest Hispanic-owned food company, Goya Foods, has partnered with United States Congressman-Elect Adriano Espailliat in an effort to aid the victims of the floods in the Dominican Republic. The joint effort has made it possible for the victims to receive 10,000 pounds of Goya products which include beans, vegetables, crackers, and nectars to those in need.

In a statement from Bob Unanue, President of Goya Foods, he states “Over 20,000 people have been evacuated from their homes and are without food. When Congressman Adriano Espailliat contacted us for help, we didn’t hesitate.  We have worked quickly with officials and our Goya team in the Dominican Republic to ensure that the people who need it the most directly received the food,”. He adds, “Our prayers go out to all those affected and we thank everyone who has helped to make this donation possible.”

This massive donation is part of Goya’s most recent campaign, Goya Gives. This campaign is a series of donations that serve to encourage others to participate in helping all those in need. Goya has a remarkably long history of being part of movements, aiding millions of people impacted by natural disasters in the United States including those affected by Hurricane Sandy, Katrina & Isaac, as well as internationally, sending help to Ecuador, Mexico, Haiti, Chile, Peru, and El Salvador.

Founded in 1936, Goya Foods, Inc. is America’s largest Hispanic-owned food company and has established itself as the leader in Latin American food and condiments. Goya manufactures, packages, and distributes over 2,500 high-quality food products from Spain, Caribbean, Mexico, Central and South America. Goya products have their roots in the culinary traditions of Hispanic communities around the world; the combination of authentic ingredients, robust seasonings, and convenient preparation makes Goya products ideal for every taste and every table. For more information on Goya Foods, please visit www.goya.com