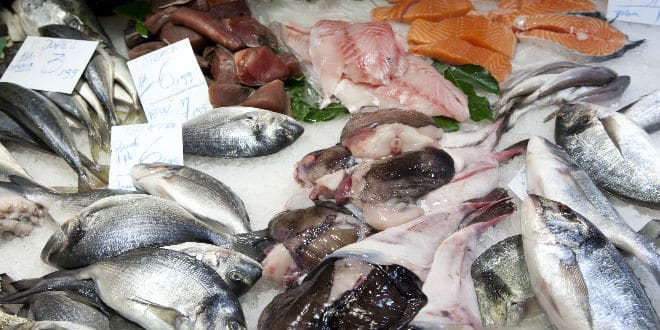 “Something fishy is going on at supermarket seafood counters”, the New York State Office of the Attorney General conclude after yearlong investigation on suspected fish fraud and mislabeling at New York grocery stores.

This is the first major government investigation in the U.S. to target seafood fraud at retail supermarket chains. The report, presented by the State Attorney General, found the mislabeling of certain popular species “was rampant.”

Consumers think they are buying lemon sole, red snapper, or wild salmon, or any one of dozens of seafood options. But too often, they get something else entirely. They unknowingly take home a cheaper, less environmentally sustainable, or less healthy fish.

Samples of fish were sent to the Ocean Genome Legacy Center, an academic laboratory at Northeastern University, for species identification using DNA testing.

The Attorney General’s investigation found that more than one in four fish samples purchased was not sold under a federally-recognized market name for that species. About two-thirds of the supermarket brands reviewed had at least one instance of suspected mislabeling.

“It’s clear that seafood fraud isn’t just a fluke – it’s rampant across New York,” said Attorney General Barbara D. Underwood. “Supermarkets are the last line of defense before a phony fish ends up as family dinner, and they have a duty to do more. Yet our report makes clear that New Yorkers may too often be the victim of mislabeling.”

While mislabeling affected virtually every tested seafood category, there was rampant mislabeling found in certain species. The results suggest that consumers who buy lemon sole, red snapper, and grouper are more likely to receive an entirely different fish.

The substitutes were typically cheaper, less desirable species. Snappers sold as red snapper, for example, tended to sell for half as much when properly labeled as another type of snapper.

What Does the Future Hold for Hispanic Grocery Stores?

Fish mislabeling occurred across most regions of New York, but was most widespread downstate. New York City had a staggering mislabeling rate (42.65%) across all samples tested, with similarly high rates of mislabeling on Long Island (40.63%) and an only slightly lower rate in Westchester and Rockland Counties (32.43%).

The report warns consumers to be on alert for seafood pricing that seems too good to be true, as it may signal problems.

“We’re taking enforcement action, and consumers should be alert and demand that their supermarket put customers first by taking serious steps to ensure quality control at their seafood counters,” said Attorney General Underwood.