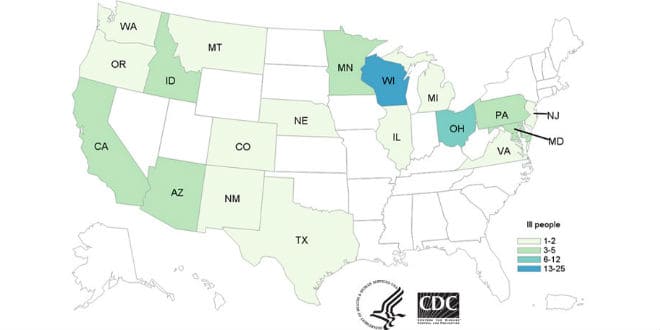 The Centers for Disease Control and Prevention (CDC) reported the warning not to consume Romaine lettuce grown in the Salinas region, California remains. The E. coli O157:H7 outbreak linked to Romaine lettuce has expanded considerably, with 27 more cases reported. The case count increased to 67 in 19 states and 39 hospitalizations have been reported.

The first report on the E.coli O157:H7 outbreak linked to Romaine lettuce was released on November 21, and a recall of 97,000 pounds of salad was ordered. The Maryland Department of Health identified E. coli O157:H7 in an unopened package of Ready Pac Bistro Chicken Caesar Salad collected from an ill person’s home in Maryland. Analysis of this salad, through Whole Genome Sequencing (WGS), has linked strain E. coli O157:H7 to three Maryland cases and the multi-state outbreak.

The FDA and state partners are conducting a traceback investigation to trace romaine exposures to the source, according to a press release. Preliminary information indicates that ill people in Maryland were exposed to romaine lettuce harvested in Salinas, California.

The case patients report that illnesses started on dates ranging from September 24, 2019, to November 14, 2019.

Dr. Trevor Suslow, Vice President, Produce Safety, said the Produce Marketing Association is following up on the investigation of the E.coli outbreak in romaine lettuces and offered the following summary on what is happening: