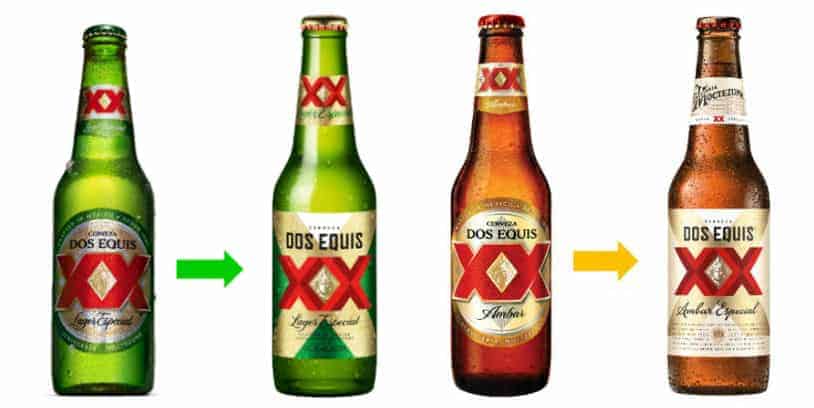 Dos Equis has been celebrating the arrival of the new and unknown since it was first named in 1897 to herald the advent of the 20th Century. The celebration continues with the latest updates to its packaging as part of an overall brand refresh to maintain relevance with today’s consumer.

The new design is modern and incorporates its Mexican heritage with a progressive fusion of cultures. It puts an increased focus on the brand’s iconic colors and XX symbol. The new cues aim to augment standout, modernity, and the brand’s premium positioning.

“The new packaging draws the consumer in with its bold simplicity and eye-catching detail,” says Ligia Patrocinio, Senior Brand Director, Dos Equis. “A hint of contrasting color conveys pride and confidence while drawing focus to Moctezuma, where the brand has its roots and where its expressive personality was born. Today, Dos Equis is entering a new era; we’re keeping it interesting with a design evolution that’s a progressive and refreshing twist on a proud tradition.”

Research conducted in advance of the enhancements showed significant improvement in all key packaging test metrics; including standout, find accuracy and time, as well as premium and modern associations and preference share for both bottles and cans.

The new packaging design is the first step in a complete brand evolution that will affect all brand touchpoints.

For the upcoming college football season Dos Equis, the official beer sponsor of the College Football Playoff, is encouraging consumers to “Tailgate Anything”, giving them the chance to win weekly tailgating themed prizes all season long.

One grand prize winner will win a larger-than-life tailgate tow trailer, decked out with tailgating essentials including a grill attachment, cooler, 50-in LED HDTV, home theater speakers and more. The promotion is currently running and will continue through to January 11, 2021.

“Dos Equis has the facts on its side to make for a relevant and highly engaging promotion targeted to college football fans,” says Reggie Gustave, Dos Equis Senior Brand Manager, HEINEKEN USA.

The official beer sponsor of the College Football Playoff –for the 5th straight year—Dos Equis owns the Mexican Imports ‘College Sports Fandom’ arena across on- and off-premise channels, over-indexing in sports watched, attended and fandom.

“What this means for retailers,” continues Gustave, “is that when college football fans go shopping for beer for gameday, they’ll be shopping for Dos Equis.”

This fall, with the impact of COVID-19 on various college football games uncertain, Saturdays may take on a different feel. To prepare for this possibility, Dos Equis is encouraging football fans and beer drinkers to get creative, and “Tailgate Anything”, front porch concerts, poker afternoons, bird watching, and of course, watching any football games on television. Whatever is deemed worthy of tailgating at home, Dos Equis encourages beer drinkers to put the cerveza on ice, fire up the grill and celebrate.

Impactful national POS to merchandise floor displays invites shoppers to enter the sweepstakes by snapping a photo of themselves with Dos Equis and uploading to www.dosequis.com/fan for a chance to win weekly prizes and the grand prize of the Dos Equis tailgate tow trailer.