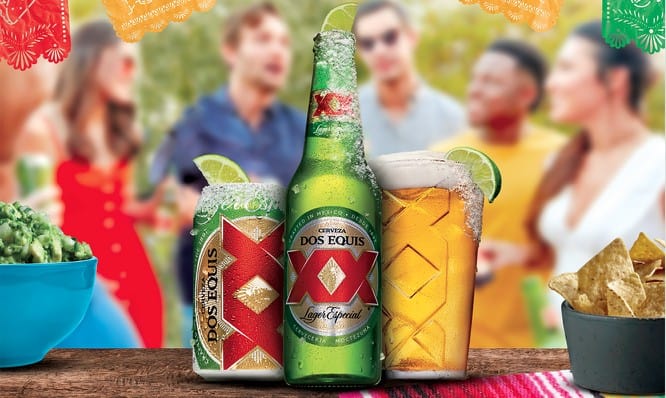 This Cinco de Mayo, Dos Equis is inviting consumers to make memories with their friends, have a good time and celebrate the occasion with the popular Mexican import. In an integrated on- and off-premise promotion, Dos Equis will reward one lucky consumer and three friends with a grand prize trip to Cancun, Mexico.

During a time when Americans buy more than $735M worth of beer, retailers and on-premise operators who support this year’s promotion can realize an increase in sales and profits as beer drinkers flock to stores and bars to celebrate this quintessential Mexican holiday tradition.

“Every Cinco party starts with Dos Equis,” says Karla Flores, Dos Equis Brand Director. “This year we are building on the momentum captured every year when Dos Equis connects with beer drinkers during Cinco.

Dos Equis grew +5.4% during Cinco 2019 and is the 4th fastest growing draught brand in the on-premise, up +4% and contributing $313 million to the category,” continues Flores. “We’re ramping up for Cinco 2020 with engaging programming that will set the brand apart from other beer options and help drive shopper purchase intent, store traffic, and takeaway.”

This year’s promotion offers comprehensive marketing tools to put Dos Equis top of mind when consumers are looking for a Mexican beer for their Cinco celebrations. Dos Equis will debut the XX Micheletas, inspired by the icy Mexican treats Ice Pops/”Paletas” and the savory beer cocktail of Mexico.

The new take on the traditional Mexican ice pops “Paletas” offers an unexpected way to enjoy Dos Equis Lager and Ambar and share the fun with friends. Amplification via consumer sampling and social media influencers means Dos Equis will own the conversations around Cinco; cantina displays and other high-impact merchandising will drive consideration and trial, and Cinco-themed giveaways will prompt shoppers to choose Dos Equis when planning for the holiday.

To guarantee engagement at the point of sale, beer drinkers are encouraged to upload a picture of themselves and three friends and qualify to win a trip for the group to Cancun, Mexico, including airfare and hotel accommodations.

Retailers know that shoppers look for all things Mexican in the days leading up to Cinco de Mayo as they stock up for the celebration. Putting Dos Equis and the XX Micheletas front and center will meet consumer demand and drive incremental sales and profits.