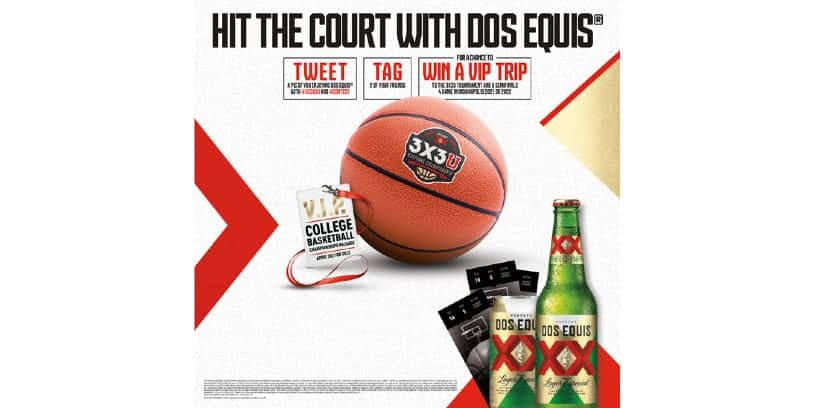 Joining in the excitement of March basketball from initial tip-off to final buzzer, Dos Equis is all in with another round of enjoyment. As the official sponsor of the Dos Equis 3X3U National Championship, the popular Mexican beer import is giving shoppers a chance at an exclusive VIP basketball weekend including tickets to 3X3U and college basketball’s 2021 national championship.

Retailers can leverage the action with a February-March multi-channel promotion featuring impactful in-store merchandising and an engaging consumer sweepstakes.

The groundbreaking 3-on-3 college basketball tournament brings together the country’s best collegiate seniors to compete one last time in Indianapolis, IN, the host city for college basketball’s national championship.

The field represents the Division I conference teams, with 56 Pool Play Games and 15 Championship Elimination Round Games played over three days. At stake is a prize pool totaling over $150,000.

“We’re leveraging the energy and enthusiasm of college basketball’s peak moment to provide a broader platform for Dos Equis and to drive store traffic to help retailers sell more Dos Equis,” says Reggie Gustave, Dos Equis Senior Brand Manager, HEINEKEN USA. “We continue to strengthen our connection to college sports to reach younger Millennials who are highly engaged with their college teams during this cultural moment,” continues Gustave. “Dos Equis will stand out from the crowd and interrupt the regularly scheduled championship with an engaging, exclusive and fast-paced tournament within THE tournament.”

The integrated retail activation around 3X3U includes a text-to-win sweepstakes for a chance at a VIP basketball experience.

Consumers who snap a photo of themselves enjoying a cold Dos Equis and upload it to Twitter with #3X3USweeps are entered for a chance to win a VIP trip for three including VIP access to 3X3U and tickets to the championship games.

Merchandising materials available to on- and off-premises operators include a pole topper, standee, and basketball-themed merchandise. Dos Equis and college basketball are the perfect picks for this engaging promotion.