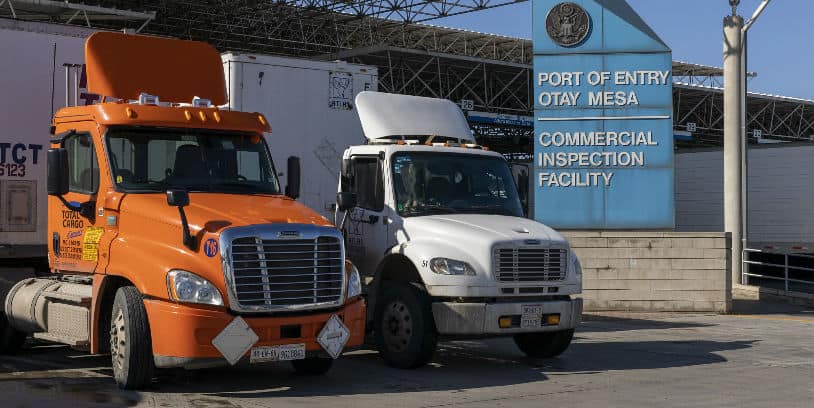 U.S. Customs and Border Protection (CBP) in recent weeks intercepted a huge amount of illegal drugs valued at more than $40 million that were being smuggled in three different shipments of produce from Mexico.

According to the CBP, on July 9th, a 35-year-old male Mexican citizen from Guadalupe, Nuevo Leon, Mexico arrived at the Pharr-Reynosa International Bridge cargo facility driving a tractor/trailer that contained a commercial shipment of fresh onions.

A CBP officer referred the shipment for further inspection which included the utilization of non-intrusive imaging (NII) technology and after physically inspecting the entire conveyance, officers discovered 221 packages of alleged methamphetamine weighing 1,527.20 pounds (693 kg) concealed within the roof of the trailer.

“This is certainly a substantial amount of methamphetamine that won’t make its final destination in the U.S. and seizing these harmful narcotics will most definitely help keep our communities safer,” stated in a press release Port Director Carlos Rodriguez, Port of Hidalgo/Pharr/Anzalduas.

On July 6, CBP officers assigned to the Pharr-Reynosa International Bridge cargo facility encountered a truck with a commercial shipment of fresh produce arriving from Mexico.

A CBP officer referred the conveyance for further inspection, which included utilizing non-intrusive imaging (NII) equipment. After physically inspecting the tractor/trailer, officers discovered 22 packages of alleged methamphetamine weighing 185.18 pounds (84 kg) with a street value of $3,704,000 concealed within the trailer.

CBP OFO seized the narcotics, the tractor/trailer and the case remains under investigation by agents with Homeland Security Investigations (HSI).

Related Article: Requirements to Import Agricultural Products Into the U.S.

Last month, U.S. Customs and Border Protection officers at the Otay Mesa Cargo port of entry seized more than 5.5 tons of marijuana, hidden in a shipment manifested as limes.

“Criminals and other bad actors will try to get past us but CBP officers are focused on protecting our communities from illicit drugs,” said Division Director Rosa Hernandez.  “I am so proud of the officers for their efforts and know that they will continue to target these dangerous shipments.”

In total, officers discovered 468 large wrapped packages containing more than 11,000 pounds of marijuana, with a street value of approximately $8.4 million. At about 4 p.m. on Monday, June 4, CBP officers encountered a 74-year-old male Mexican citizen, driving a tractor pulling a trailer carrying a shipment of limes.

A CBP officer referred the truck and shipment for a more in-depth examination. CBP officers searched the trailer, it was full of boxes with supposed limes within, and they identified anomalies. A CBP officer probed one of the boxes and extracted a green leafy substance that field-tested positive for the properties of marijuana.

In total, officers discovered 468 large wrapped packages containing more than 11,000 pounds of marijuana, with a street value of approximately $8.4 million.