Home » News » Boing! Is Back in the United States 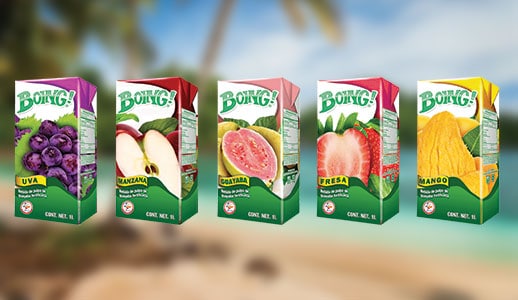 Boing! is one of the most recognized beverage brands by Mexicans thanks to its large quality and tradition of over 50 years.

The company has two production plants in Mexico. With more than 29 distribution centers, it is dedicated to produce and distribute nutritious and healthy drinks, made with natural fruits, including: fruit pulp, juices, purified water, soft drinks and dairy products in the following brands: Boing!, Pascual, Pato Pascual, Pascual Citrus, Lulú and Mexicola. This range of brands is intended to satisfy
its customers’ needs through continuous improvement in the production process.

“Our brand has great benefits. The company has been in Mexico for more than 75 years. It will turn 30 as a Cooperative, which means that owners and management at the company are the same workers, “said Lic. Felipe Bautista Portes, director of Exports Mexico.

“The great success of the Boing! brand is the fact that the product is made with 100% natural fruit. It’s not made from concentrate and contains no artificial colors or flavors. It is basically a traditional procedure where the fruit is purchased straight from the field. The fruit is then processed and the pulp is obtained for development of Boing! products, “he added.

Boing! Returning to the US market

Boing also has great recognition in the United States. It returns to the market after almost three years of absence.

For over 15 years the Boing! brand was on supermarket and store shelves in the United States. However, due to differences with its former distributor in the US, the company was forced tostop exporting their products directly.

“Obviously because of the product’s existing demand by the consumer, some distributors who were used to having these types of products were able to get it in Mexico and brought it to the United States, “said Portes. He explained that those products were made for exclusive use in Mexico.

In early 2014, a legal resolution was found in favor of the Pascual Cooperative. The search began for distributors to conduct the marketing so that it was authorized in the United States, under the direction of Arturo Perez.

“We are resuming our operations of the Dirección de Exportaciones Mexico. Everything is authorized, organized and in compliance with all Food and Drug Administration (FDA) regulations. The packaging includes documentation in both languages ​​and meets all specifications demanded by the US authorities,” he said.

To obtain more information about Boing! and all their products, please call 888-388-4177 or e-mail [email protected]