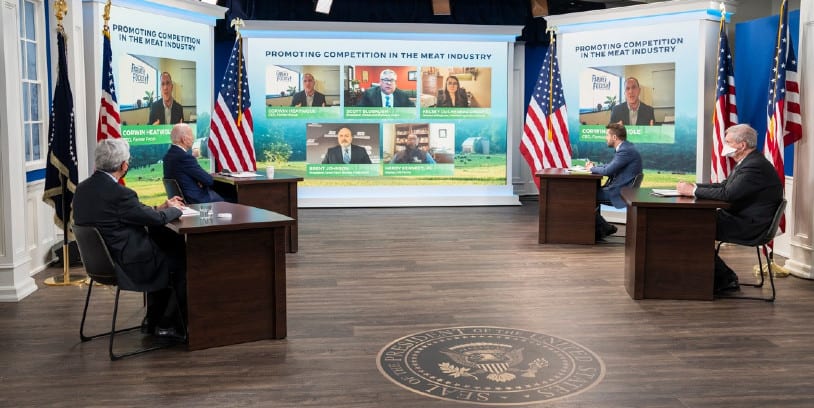 President Joe Biden convened a roundtable Monday, January 3rd, with farmers, ranchers, an independent poultry processor, and members of his Cabinet to discuss the need for greater competition in the meat industry. Biden announced the Administration’s Action Plan for a Fairer, More Competitive, and More Resilient Meat and Poultry Supply Chain.

The President, Agriculture Secretary, and the U.S. Attorney General explained the Administration’s steps to increase processing options for farmers and ranchers, create fairer and more competitive markets, bring down prices for consumers, and ensure farmers and ranchers get a fair price for their product.

The President highlighted the strong economy going into 2022 and explained that under his July Executive Order on Promoting Competition in the American Economy, the Administration focused on tackling the lack of competition in agricultural markets.

“In too many industries, a handful of giant companies dominate the market. And too often, they use their power to squeeze out smaller competitors and stifle new entrepreneurs, making our economy less dynamic and giving themselves free rein to raise prices, reduce options for consumers, or exploit workers. The meat industry is a textbook example on the price side,” said President Biden.

For its part, the North American Meat Institute (NAMI), responded to the Biden administration’s plan to boost competition in the U.S. meat and poultry industry. The national association of meat and poultry packers and processors of all sizes stated that government intervention in the markets will not help consumers or producers.

“The Biden Administration continues to ignore the number one challenge to meat and poultry production: labor shortages. This tired approach is not surprising because they have refused to engage with the packing and processing sector they attack, going so far as to hold a roundtable on meatpacking without a single beef or pork packer present,” said Julie Anna Potts, President and CEO of the North American Meat Institute.

According to a NAMI statement, the Biden Administration has claimed industry structure keeps down prices cattle producers receive for their animals, conveniently ignoring the fact that the beef industry has changed little for almost 30 years. Prices reflect supply and demand in a healthy market.

Meanwhile, The White House said the USDA reviewed nearly 450 comments received over the summer in response to its request for input on how best to increase independent processing capacity. Through their analysis of stakeholder input, USDA identified an urgent need to:

Secretary Vilsack provided details on the Administration’s $1 billion investment of American Rescue Plan Funds to finance and support independent processing projects that give farmers and ranchers more and better options. “I think it’s really important to emphasize it’s not just farmers who are going to benefit from this, it’s also rural folks looking for a decent job. And if we do this right -with workforce training, with assistance- we can have good-paying jobs to complement what’s happening on the farm,” said Vilsack.

Scott Blubaugh, President of the Oklahoma Farmers Union, explained that “for too long, we have seen the multinational meatpackers suck out all of the wealth of rural America and put it in their corporate coffers and, in some cases, even overseas. So, we’re excited about having local processing done by local people and then selling directly to the consumer. You know, whether we can sell to the grocery stores, the restaurants, or the consumers directly, all of these will enable our rural communities to be lifted out of poverty. And we have a great poverty problem in rural America. So, we’re excited about that.”

Specifically, the Biden-Harris Administration will:

At the round table, Attorney General Garland spoke to the Justice Department’s commitment to increase competition across industries, including the agricultural sector, and to enforce federal laws robustly and vigorously. He described a new joint initiative with the Department of Agriculture to better coordinate the two agencies’ federal enforcement efforts, including the launch of a new common portal within 30 days where farmers and ranchers can lodge concerns about potential violations of the Clayton Act, Sherman Act, or Packers and Stockyards Act.

Corwin Heatwole, the founding farmer and CEO of Farmer Focus, said, “when you empower farmers with ownership and control, enabling farms to be viable and sustainable for the next generation, that incredible success stories emerge of farmers returning to success from the brink of bankruptcy. And you even see the next generation returning to the farm. And we’ve seen the average age of our farmers now trend about ten years below the national average. This model has enabled a resilient community of thriving farmers while bringing the consumers the transparent and traceable products that they’ve been looking for.”

The Biden-Harris Administration will work to increase transparency in cattle markets so that ranchers can get a fair price for their work: