Home » Agricultural Industry » Can You Imagine A Purple Carrot? 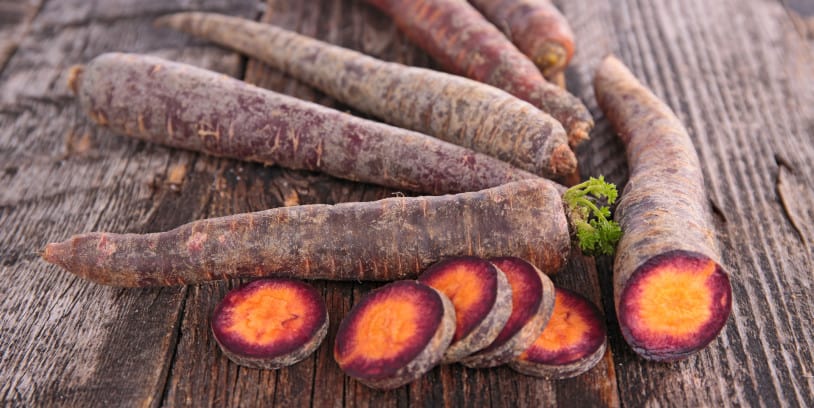 The carrot first appeared in Central Asia, spreading its cultivation to Europe and the rest of the world. Initially, the variety of this delicious vegetable grown in Afghanistan was purple on the outside and orange on the inside. But to the surprise of many, it was only in the 17th century that the first orange carrots appeared.

American cuisine did not include the carrot for a long time. This vegetable was accepted in American homes only after World War I when soldiers returned home. They brought back stories and seeds of a great European vegetable that immensely helped them survive the war.

Within Mexican food, two vegetables play a leading role; the tomato and the carrot.

Usually, carrot is consumed steamed with other vegetables or broths, be it chicken, beef, fish, or shellfish. In Hispanic cuisine, families can consume these veggies in many dishes. There is another way to eat it, and it is in “pickles,” a preservation process that allows you to have food in the pantry for months without perishing.

Carrot is one of the favorite vegetables to include in pickles, either to add more flavor to some dishes or to consume them as a snack. This process consists of leaving them in glass jars with vinegar, salt, and some spices and sometimes with other vegetables, such as jalapeño peppers, nopales, potatoes, etc.

Related Article: The GPS for the Agriculture Industry Supplying Data

Also, the carrot is widely used in desserts or even, after washing it very well, it can be eaten raw in salads and presented in small pieces or grated. It can also be squeezed to get a carrot juice that, taken days before being exposed to the sun, ensures a more beautiful tan.

This juice is usually mixed with beets or orange for breakfast, something simply nutritious and delicious.

Carrots have been one of the most widely used foods for centuries, both for their nutritional properties and beneficial effects. They have an incredible flavor and have a high amount of beta-carotene.

Beta-carotenes are the primary source of safe vitamin A for human consumption, which is essential for proper development and growth and is crucial for the adequate functioning of the immune system and eyesight.

In 2014, the United States sold 954 million pounds of carrots, while in 2020, it had commercialization of 1.3 billion pounds, which represents an increase of 36.5%, an increase that can be seen in the following graph:

90% of this carrot comes from two main regions: Central California with 68% production and Mexico with 22%. Both areas produce throughout the year, which makes it possible for us to enjoy fresh carrots on our table all the time.

California had a production increase of 7.8% compared to 2019, mainly from November to December. The increase in this vegetable’s volume is primarily related to the fact that carrot produced in the previously mentioned regions has increased. Within California, the Kern region is the one that has increased its harvest volumes.

Mexico, carrots’ leading exporter to the United States, has increased its export volume by 27% compared to 2019. Its growth has been steady, with 2020 being a record year with a 41% growth in carrot exports compared to 2014.

Carrot consumption will continue to grow in the coming years since when opening any refrigerator, we will find this vegetable ready to be used in many recipes. Also, it is the protagonist of numerous dishes since its culinary versatility is infinite.