Home » News » A Rich Heritage: Mexican Flavor in the U.S. 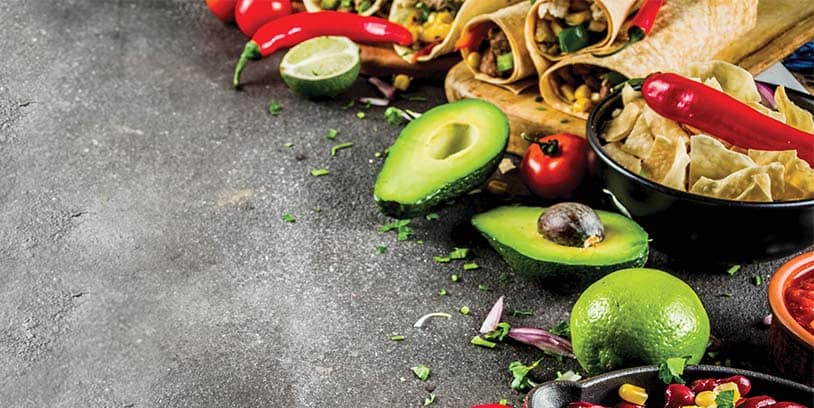 At this time of year, when we recognize our Hispanic heritage, it’s worth highlighting some of the pioneers who helped push Mexican flavor in the United States.

Perhaps these pioneers would be astonished to see the penetration and acceptance of traditional Mexican dishes and beverages into every American home.

The prevalence of tacos as one of the favorite dishes in the homes of any ethnic or racial group in the U.S. is impressive. And what about the consumption of nachos, salsas, and guacamole? For many years the number one cocktail in the country has been the Margarita. Indeed, the success of Mexican flavor in the U.S. has been astounding.

The food and Mexican flavor have influenced American cuisine for centuries. And these achievements have not been in vain. During the latter half of the 1900s, Mexican-inspired foods reached every corner of the United States, penetrating homes of all types.

Along with traditional foods such as tortillas, tacos, tamales, enchiladas, and salsas, new dishes emerged that reflected a blend of Mexican, regional areas such as Texas and other Latino cultures. This is according to the archives of the National Museum of American History.

Tortillas in the supermarket

In the 1990s, salsa, with its traditional Mexican flavor, challenged ketchup for condiment supremacy in the United States.

Related Article: Statistics Behind The Insatiable Appetite for Mexican Food in the U.S.

Art Velasquez, a Chicago entrepreneur, founded Azteca Foods in 1969, which sold Mexican and Central American foods in supermarkets across the country. Azteca extended the shelf life of its corn flour and tortillas, and the mold was used in restaurants to bake taco salads.

After her family emigrated from Mexico to Texas in the 1890s, Adelaida Cuellar began selling her handmade tamales at the county fair, which she prepared with the most exquisite Mexican flavor.

In 1928, she opened a neighborhood restaurant, which her family expanded in the 1950s into the El Chico Tex-Mex restaurant chain. By the 1990s, the Cuellars owned more than 100 El Chico restaurants, from Dallas to Dubai, where American oil company executives could enjoy a taste of home.

The Cuellars were among the first entrepreneurs to help transform Tex-Mex food into one of the most popular and widespread forms of Mexican American cuisine.

Hundreds of Tex-Mex-style restaurants opened in the United States, competing with other regional variations such as Cal-Mex, Sonoran-Mex, and New Mex-Mex, and fast-food chains such as Taco Bell.

Central American restaurants also added Tex-Mex dishes and drinks to their menus. El Chico was one of many companies marketing their brands of canned and frozen foods for distribution in supermarkets.

First mixed in bars along the California-Mexico border in the 1940s, the Margarita (tequila, lime juice, and orange liqueur) became a standard drink in Mexican-American restaurants.

Frozen margaritas, mixed with ice, became popular in the 1950s and other tropical drinks made with rum and tequila. By the 1970s, the Margarita had surpassed the Martini as the most famous American cocktail. It remains popular today.

An Eye-Catching Future for Mexican Flavor

Along with many others who helped spread the Mexican flavor, these pioneers have helped American palates enjoy the wide variety of Hispanic food.

The growth we will continue to see in the U.S. Hispanic population, and that new generations of consumers desire different seasonings will drive this genre. This means that the growth potential for Mexican food and beverages will continue to be very appealing.