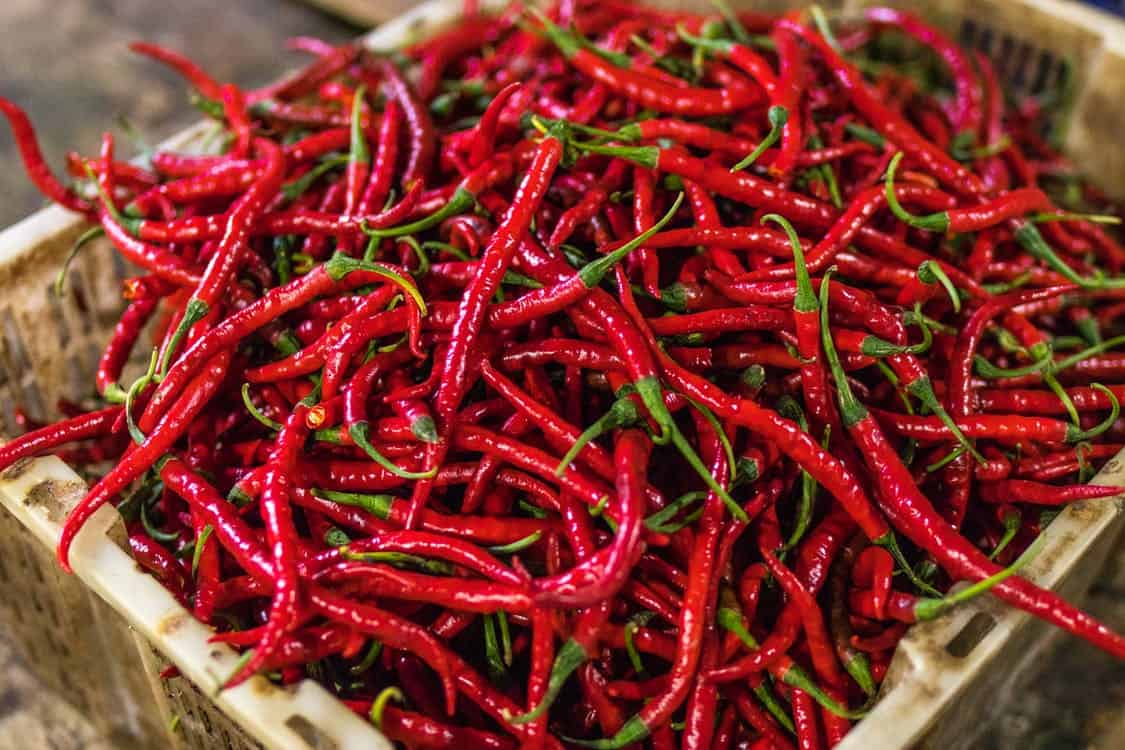 It seems that every year a new hottest pepper in the world is discovered or created. Just like hot dog eating contests, the ability to eat a hot pepper is another popular food challenge that brings in television viewers from around the world.

But why are some peppers so hot in the first place? What is it that makes peppers so hot, and what are the five hottest peppers in the world today?

Why are Some Peppers so Hot?

The reason why peppers have developed the sensation of heat over the many thousands of years is not that clear, even to scientists who have been studying this phenomenon. The conventional wisdom is that the peppers which contain more capsaicin deter insects and mammals from consuming them. Because the capsaicin can be sensed even before the first bite is taken, that is enough to turn away many potential predators.

Another theory is the area in which the peppers developed in which some may have grown in environmental conditions that have aided in the production of capsaicin. But most likely it is a combination of both. Whatever the case, it is true that most insects and animals will avoid peppers or only nibble at them to discover the capsaicin and turn away before any real damage has been done.

However, humans have embraced the spiciness of the peppers which have become a part of many dishes around the world. In recent years, there have been genuine efforts to increase the capsaicin amount to create an even hotter, spicier pepper.

What Makes Peppers So Hot?

Peppers can range from quite mild to super-hot in terms of their taste. Technically speaking, it’s not about the temperature of the pepper itself, but instead in the inclusion of capsaicin. This is a substance that bonds to the heat sensors that are found on the tongue. When you eat a hot pepper, the capsaicin will attach itself to the heat sensors and provide the sensation of heat.

The actual temperature of the pepper itself has no effect. Only when the capsaicin fades does the sensation of heat go away. As people have grown accustomed to peppers that are grown naturally, there has been an effort to increase the capsaicin artificially through breeding that has created some of the hottest peppers in the world.

Five Hottest Peppers in the World

The reaper is a cross between a Red Habanero and a Ghost Pepper and even looks pretty mean with its bulbous body and stinger tail. Those who have dared to taste it say that the pepper has a fruity flavor, but that seems like a small amount of pleasure given the sheer amount of heat that it delivers.

Trinidad Moruga Scorpion – 2 Million SHU: Just behind the Carolina Reaper is this entry from Trinidad which has the same red bulbous body but is slightly less hot although you may not be able to tell the difference. This particular pepper was recently found in Moruga, which is part of Trinidad & Tobago, islands in the Caribbean Sea. It may not have the famous stinger tail of the Carolina Reaper, but this pepper does seem to be the hottest natural, non-bred version in the world.

7 Pot Douglah – 1.85 Million SHU: This is the hottest, non-red pepper in the world which is somewhat unexpected. This may be why so many are fooled by the brown color into thinking that it can be easily consumed. This super-hot pepper is not far away from the world record and has the reputation of being quite tasty if you can stand the heat. Many people will use dried, powdered versions of this pepper to spice up their meals.

“Butch T” Trinidad Scorpion – 1.5 Million SHU: Before the Carolina Reaper took over the world record was the famous “Butch T” that held the distinction as recently as 2011. Named after its creator, Butch Taylor, this Trinidad Scorpion version is natively grown in Trinidad & Tobago but has been augmented thanks to some selective breeding. It also features that stinger tail and has a burn that may not be as hot as the Reaper, but it is no less painful.

7 Pot Primo – 1.5 Million SHU: Similar in look and coloring to the Carolina Reaper, the 7 Pot Primo even has a stinger tail although it is not as long. Created by Troy Primeaux, a horticulturist who has been working on creating a hot pepper to rival the Reaper, the 7 Pot Primo is certainly close. It does have a good flavor if you can get past the heat and like most peppers in this SHU range is best when dried, turned into powder, and lightly covering dishes that need that extra kick. Or a big kick as this pepper routinely delivers.

Here is a list of the top 10 hottest peppers on Earth.

It is highly recommended that you never consume any of these peppers whole as the pain from the heat is considerable and what it does to your digestive system may not be tolerated either. When dried, ground, and sprinkled into different foods, the taste can be enjoyed with far less of the burning sensation.

If you are looking for the hottest pepper in the world, then you can start with the Carolina Reaper. It is not advised that you eat or even taste the pepper, but it is one for the record books. For those who love peppers, the Carolina Reaper certainly lives up to its name in terms of the heat it delivers.