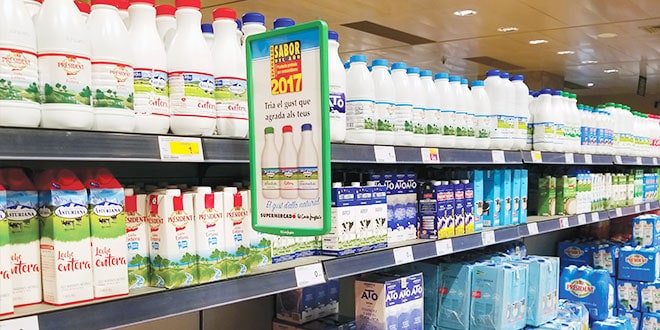 On a recent trip to Spain, I had an opportunity to tour a few grocery stores. No matter the time I spend in a store, it’s never enough. I think I could walk every department, every dairy aisle, read every label, and speak to shoppers, and still not be satisfied I saw and “took in” everything.

I find it very interesting to compare and contrast the stores in other countries to the retail grocery stores in the U.S. The biggest similarity I observed on this trip is the lack of innovation in merchandising in the dairy department.

While the stores I visited had created many destination departments to compete with rivals outside the store, including the local farmers’ markets, bakeries, tapas houses, confection stores and the popular e-commerce channel in Spain, the dairy aisle looked very similar to those in the U.S. and appeared to not have had any attention given it in the last several decades.

The biggest contrast however, is in the processing and type of milk packaging offered. There were two full aisles of aseptic milk packaging available. This milk has been pasteurized at a temperature over 275 degrees F for 1-2 seconds and is shelf stable.

There were only three shelves of refrigerated milk available, which has been pasteurized via HTST (high temperature/short time) at a temperature of 162 degrees F for 15 seconds and which must be refrigerated.

Photo Gallery of a Dairy Aisle in a Grocery Store in Spain:

Milk processed using either method, has the same nutrients and vitamins.  It is interesting to me aseptic milk has a much broader acceptability across the world than here in the U.S.

Is it due to the lower per capita milk consumption in other countries, and therefore a need for longer shelf life?  Actually no, the U.S. ranks 16th on the list of per capita consumption.

The top 15 countries are all European countries where UHT aseptic packaging is the primary processing and packaging type. The top country, Finland, consumes 1/3 more per capita than in the U.S.

The greatest benefit of aseptic packaging is in the sustainability success story it provides.  With a growing interest in protecting our natural resources in the production of our food, and doing it in a sustainable way, aseptic packaging provides benefits with a reduction in refrigeration usage in production and transport, which also has associated cost savings.

What does the future look like for aseptics in the U.S.?  The U.S. consumer has been slow to adopt the usage of aseptic packaging however I believe as the interest in sustainability continues to grow across all consumers, and the US becomes more multicultural with a familiarity of this process and package, the acceptability of this package will increase and speed up.

In addition, with no refrigeration needed, placement in the grocery aisle, will also allow for more innovation and product diversification because there is no “land locking” which is currently a restriction to category variety and growth in the refrigerated dairy aisle of today.