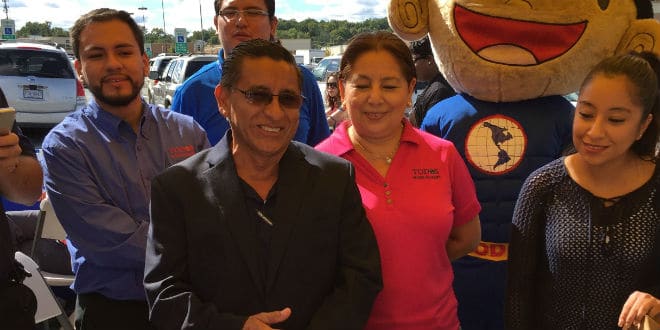 Todos Supermarket is not a powerful supermarket chain and does not pretend to be. They only have two stores, but they employ 180 people, making them one of the main employers in Prince Williams County, Virginia. The owner of the stores, Carlos Castro, native of El Salvador, has been perfecting his business for 27 years and earning the appreciation and respect of the community. He has become a voice that is heard by local leaders, his colleagues in the food industry and at the political level.

Important national media such as The Washington Post, USA Today and Huffington Post, have published Carlos Castro’s success story. Even candidates for state governor have asked for permission to campaign in front of his supermarket because they know that this is the place where they can go to speak to the Hispanic community.

A couple of months ago, on September 7th, Don Carlos, as his employees and clients affectionately call him, testified before a congressional committee in Washington D.C. on behalf of the influential National Grocers Association about the obstacles faced by independent supermarkets to sustain their businesses due to certain laws.

Carlos Castro is an influential businessman, but he has kept his humility intact and always has keeps in mind that his most important mission is to serve and give voice to the Hispanic community.

Since he opened the supermarket 27 years ago in the Woodbridge area, with the support of his wife Gladis who has been instrumental in the success of the store, he saw the great need among Latinos to have a grocery store that offered Hispanic products, where they could also find other types of community services.

The Castros started their grocery business with three employees in a small place in 1990, just a few blocks from where they are currently located on the Jefferson Davis Highway in Woodbridge. In the beginning, they found it difficult to find Hispanic products to sell in their store and on many occasions they had to order them from acquaintances because there were no companies that distributed them. Their own customers were the ones who told them what products they should have for sale in their store.

Over time, Todos Supermarket gained the trust of the rapidly growing Hispanic community in the area. In addition to being the favorite store for Latinos, it became the place where immigrants found information or advice of all kinds.

“I think it took us ten years to learn the business well, but it was very beautiful because people also asked my wife questions and she told them to come back at 6 in the afternoon to talk to me. Then without knowing it, we became the meeting point where people respected us because they considered that we had knowledge and could come to ask us questions with confidence,” Don Carlos told Abasto.

To manage the two stores of Todos Supermarket, Carlos Castro has surrounded himself with a team, made up mostly of Hispanic women, who have shown great qualities in the complex management of a supermarket. “For me, it’s not important for my employees to have a university degree, but to demonstrate their work skills, loyalty and decision-making power,” said the Salvadoran businessman.

But in the competitive supermarket industry, independent stores face many challenges. This was stated by Don Carlos in his testimony before a congressional committee where he explained the difficulties that independent supermarkets face due to the overwhelming amount of regulations that hinder the growth of small businesses.

During the hearing entitled “Examining the Labor Market of Small Businesses,” Don Carlos spoke to lawmakers on behalf of the influential National Grocers Association.

“Costly regulations often take a lot of our time and resources and represent a serious barrier to hiring new talent,” Castro said in his testimony. He explained that 40 or 50 thousand dollars may not be significant in Washington, but for an independent business, that amount may be enough to put it out of business or hinder the hiring of new workers.

“At Todos, we often say ‘if you have a good attitude and work hard, there is no limit to how high you can rise.’ With business, it should be the same,” the owner of the Hispanic supermarket told the legislators and he asked them, “to continue look for opportunities to unshackle businesses from their heavy regulatory burden, and let businesses like mine see how high we can go.”