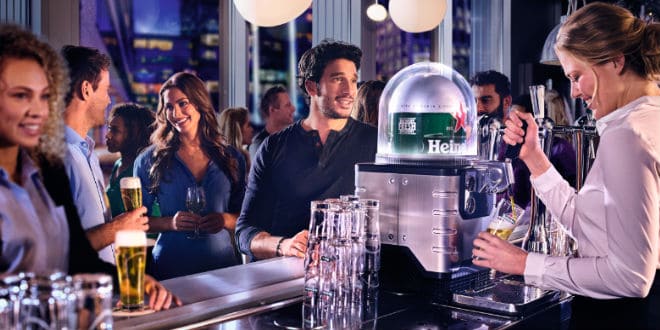 Heineken USA will introduce BLADE, it’s innovative countertop draught system, at the 17th annual Tribeca Film Festival, presented by AT&T April 18 – 29 in New York City. BLADE is designed to deliver a premium draught beer experience at any kind of venue and one as fresh as the films the festival celebrates.

Tribeca Film Festival is the leading cultural event that brings visionaries and diverse audiences together to celebrate storytelling in all its forms, including film, TV, VR, gaming, music, and online work. BLADE will deliver premium, buzzworthy experiences that drive awareness among the influential consumer set and provide education on the new system’s benefits to the on-premise trade channel.

“We are delighted with the opportunity to introduce and showcase BLADE at Tribeca Film Festival,” said Raul Esquer Lopez, Heineken Brand Manager. “The planned activations will not only enhance the beer experiences at the festival but will give on-premise operators a firsthand look at the system’s unique features and benefits. Measuring 11.4” wide x 18.5” deep x 23.2” high, BLADE requires space smaller than most commercial espresso machines, needs only an electrical socket to be fully functional, guarantees brewery-fresh draught for 30 days, requires no cleaning or maintenance, no installation, and weighs only 38 pounds,” continued Raul Esquer Lopez, Heineken Brand Manager.

“We expect BLADE will be a perfect fit for small bars and restaurants currently without a draught beer program or for accounts with one or two taps looking to maximize profitability and remove the hassle of traditional draught systems,” said Esquer Lopez.

BLADE activations throughout the Tribeca Film Festival will provide guests with a custom Heineken® brand experience. Starting with an official BLADE launch event for retailers on April 19th at the Tribeca Festival Hub at Spring Studios, guests will interact with BLADE ambassadors to learn more about the system’s technology and will be invited to serve their own brewery-fresh beer.

Additionally, informational stations throughout the event space will educate the trade on the technology and purchase options. Spring Studios is a state-of-the-art event space equipped with best-in-class technology and the utmost in comforts to provide the ultimate experience.

Will Heineken’s ‘Plug and Pour’ Innovation Be the Future of Beer?

The space is home to the Festival headquarters, to which all Tribeca Film Festival passholders have access. Additional BLADE activations include the Tribeca late night hosted by Heineken at Public Arts in Public Hotel on April 22nd, and the Heineken Innovation Session at Freddy’s Café in Soho House Meat Packing on April 25th.

“The Tribeca Film Festival brings together film aficionados to enjoy great film experiences and now, with BLADE, great beer experiences,” added Raul Esquer Lopez. “We think that once consumers get a taste of the brewery-fresh draught beer that BLADE delivers, and on-premise operators get a hands-on experience with the system’s features and benefits, BLADE’s debut at Tribeca Film Festival will mark the beginning of a new era for draught beer.”