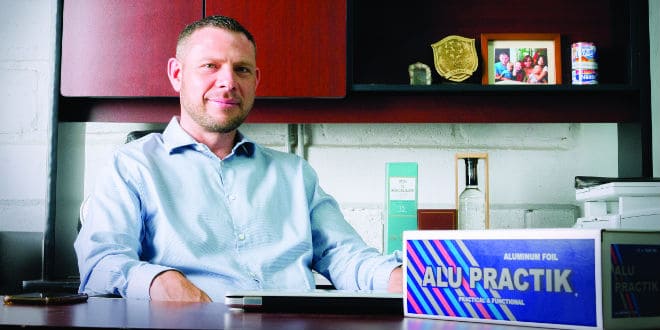 Juan Manuel González describes himself as a natural salesman, a passion that awakened in him since he was nine years old. During his career, always looking for what to sell, he found the ideal business to grow not only in México, but in the United States market. That’s how, 14 years ago, in Guadalajara, he founded his company GMA Industrias, which sells aluminum foil.

” At that time, when I found out that one of the big brands had problems with the supply of aluminum foil, I realize that I had the opportunity to do a good business,” said González, in an interview with Abasto.

The name of his company arose from the initial letters of his wife Georgina and his daughter Marham. “It was like a little tribute to my wife and my daughter,” Gonzalez said. After a year of business planning, says the entrepreneur, he installed five semiautomatic machines for winding aluminum foil, to produce small portions according to the sizes of his sales catalog, which are seven, ten or 50 meters.

His long career in sales helped González so that his clients could open the doors to his aluminum foil. “The truth is that I am very grateful to the first customers because they were the pillars of this business, they supported me one hundred percent, giving me preferential spaces, promoting me with their own sales forces.”

With this impulse, GMA Industrias began to grow in the wholesale channel nationwide in Mexico. In its second phase, the company set the goal of positioning itself in institutional retails and the most important in this segment is Sam’s stores. “It took us about five years to open Sam’s doors, it was an exhausting process, but it was worth it. The recognition that our brand already had among the wholesalers allowed us to enter Sam’s,” said González.

But the plans of GMA Industries founder were not limited to selling aluminum foil in the main retail channels in Mexico, because parallel to the work of placing their products in Sam’s, González began a  market exploration in the United States.

“I went to the United States with the dream that my products were on the shelves of the most important country in the world. What we didn’t consider is that it was a very long process, it took us about seven years to have a presence in the US, “said González.

To fulfill his dream, González had to adapt his product to the different needs of the US market, where the low price is not everything to win over the consumer. “I realized that our products needed to be aesthetically more attractive and give us a differential with the other economic brands and that difference was a metal saw in the box.”

Because of its quality and low cost, the aluminum foil of GMA Industrias managed to get Dollar General to open the doors of its 14,000 stores in the United States. In terms of logistics, it was a challenge for González to start the process of supplying his clients and in the search for solutions they found logistics distributors in the border in Texas, that adapted to their specific needs.

The next step for GMA Industrias is to continue growing in order to have access to large retailers in the United States and to Hispanic stores, where they also hope to offer various Mexican food products distributed by its sister company, GMA Trading.

González started his business with eight employees. In its eighth year, he automated production at the factory, lowering operating costs and allowing him to offer lower prices. Since then, sales have grown by 100%, allowing him to increase his work force and currently GMA Industrias employs 140 people.