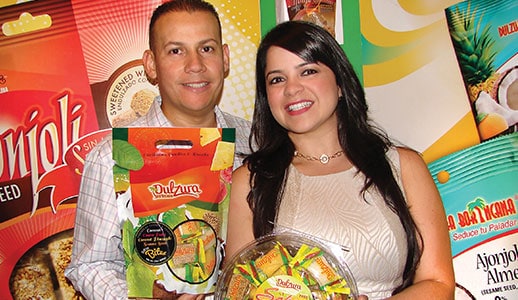 Thanks to the high quality and originality of its products, the Puerto Rican company Dulzura Borincana has been making headway among American consumers. The American market finds their snacks and sweets to be healthy alternatives that offer great taste and high nutritional value.

The company was founded in 1996 by Carlos Rivera, a young entrepreneur who had the vision of offering a distinctive selection of snacks made with tropical fruit preserves, pulp and seeds.

Flavor options for the snacks and sweets include: pineapple, coconut, guava, mango, orange, sesame, sunflower seeds and flax, and others.

The Beginning of Dulzura Borincana

“Starting and growing a business requires many hours of work, a lot of imagination and great sacrifices,” said Rivera. He runs the company together with his wife, Carmen Rios.

“Starting and growing a business requires many hours of work, a lot of imagination and great sacrifices,” said Rivera.

The entrepreneur recalled how he did not have the resources to hire employees at first. As a result, he had to perform any task necessary in order to move forward with his dream.

Rivera’s company grew as time passed. The business gradually incorporated the machinery and technologies needed to increase production and meet the high consumer demand on the island.

Today, the two young entrepreneurs remain true to their vision. They are dedicated to their vision of turning that small company into an industry leader in its category.

By using the highest quality ingredients and a unique product development process, Dulzura Borincana has managed to make its brand stand out in an increasingly competitive market.

Today, 19 years later, with a manufacturing facility of 22,000 square feet, the company has the power to expand its logistics around the entire island of Puerto Rico. It plans to reach out to wholesalers, supermarkets, airports, hotels, pharmacies, department stores and retailers.

In addition, its products can be found in more than 40 states in the US through well-known chains such as Marshalls and TJ Maxx.

The company’s products are also available in supermarkets in New Jersey and New York. Retailers include Shoprite, Food Bazaar,Western Beef, Compare Supermarket, and others.

In addition, they are established in Virginia, Maryland and Washington DC, where their products can be found in supermarkets such as Weis and FoodMaxx. They have an international presence in Canada and Panama as well.

Dulzura Borincana hopes to continue tempting the palates of all Americans through their unique, highly nutritional snacks.