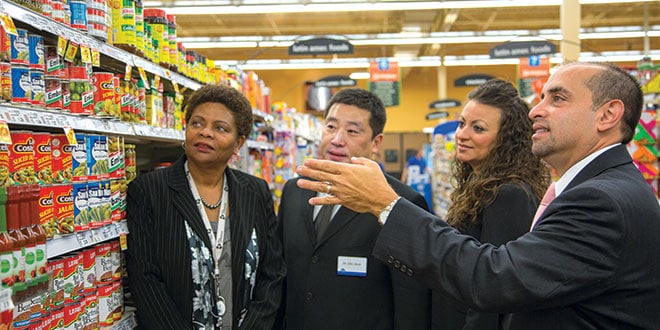 Kroger is one of the largest supermarket chains in the U.S. with more than 2,700 stores located in 35 states and the District of Columbia. Its workforce exceeds 400,000 employees, thousands of them are Hispanic as well as other minorities. One of them is Ángel Colón, who is the Senior Director of Diversity of this giant supermarket company.

For Kroger, diversity and inclusion are the fundamental basis for their growth. By early 2017, Ominkal, the nation’s largest inclusive business organization, ranked Kroger among the top 10 corporations in the United States, recognizing its work in the area of diversity.

“We want the family of Kroger stores to reflect the diversity of our clients and our communities, that’s our vision,” said Colón in an interview with Abasto Magazine.

Kroger is also a member of the “Billion Dollar Roundtable,” consisting of 22 corporations that have achieved spending of at least $1 billion with minority and woman-owned suppliers.

Also, the U.S. Hispanic Chamber of Commerce included Kroger in their “Million Dollar Club” as an acknowledgment for being a leader in integrating their supermarket chain with businesses that belong to Hispanics.

Colón became the first Hispanic to be named Senior Director of Diversity of Kroger last April. This “pure-bread Puerto Rican” with more than 27 years of experience in the supermarket industry, told Abasto that his knowledge in multicultural development areas and in diversity were important factors for his new position.

During the “Food for Tomorrow” conference sponsored in the New York Times last year, Roger McMullen, President and CEO of Kroger, said that supermarkets need to be flexible and diverse if they want to be successful and still functioning in the next ten years.

The new Senior Director of Diversity is very clear about this goal, as he explained to Abasto. “In order to have success, we have to listen to our clients and associates. Diversity, inclusion, the ideas that surge from there, are a big part of my job.”

Although the company does not provide concrete figures on the demographic percentages of its workforce, Colón said that thousands of workers are from minorities and more Hispanics are getting management positions.

This year, Kroger also named a Hispanic as President of one of their divisions for the first time. Dan De La Rosa, who started his work in Kroger in 1980 as an office assistant, took the role of President of the Columbus division last March.

Nevertheless, Colón recognized that “there’s always opportunities to incorporate more Hispanics in company leadership roles and it’s something in which we have to work hard for.”

In supermarkets, the aisles reflect the diversity of its clients

Diversity is not only reflected in the company personnel. In the supermarket industry, the aisles are filled with products that represent the great diversity of its clients. “As the population continues to change, we are not trying to bring specific products for only one group of clients because we have learned that international foods are not simply for the international community. Everyone is trying our Hispanic food,” said Colón.

The Director of Diversity said that to keep Kroger connected with minorities and Hispanics in particular, they work on several objectives:

They have also launched a Spanish website, Kroger.com/tu-mesa, where Hispanics can find information in their language about sales in Kroger, products, coupons, recipes and events.