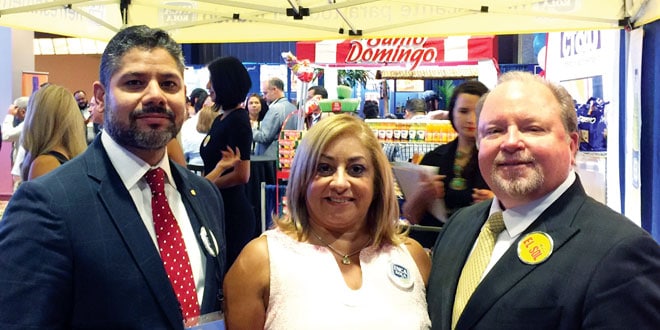 What is today Continental Food and Beverage Inc./ Inca Kola USA, started as a dream from Cuban Luis Jardines at the beginning of the 80s when he had to ride a taxi to distribute the Inca Kola Peruvian soft drinks in Miami businesses.

Almost four years later, this dream has transformed into a successful company that is the exclusive bottler and distributor of Coca-Cola for the Inca Kola brand of soft drinks in the United States that are distributed in more than 40 states and internationally in 20 countries, as well as owning other brands of beverages and food products.

The past month of August, during the annual trade show of the National Supermarket Association that took place in New York, the organization of independent Hispanic supermarkets awarded Continental Food and Beverage Inc./Inca Kola USA with the title of Best Company of the Year.

This family business that is based in Clifton, New Jersey, is run by the granddaughter of the founder, Elizabeth Chalas Bergman, President of the campaign; her husband, Randall Berman, is the COO and her nephew, Julio Coën, is the General Manager.

In an interview with Abasto magazine, Elizabeth Chalas Berman assured that the secret to the success reached by Continental Food and Beverage Inc., “is working as a team and identifying the talent that is in every person that works in our different markets, that is why we have covered so much territory with success.”


Randall Berman added that another part of their success is due to, “the connection that we have with the community. We are supporting the chambers of commerce, local community organizations, civic centers. With these connections and the help that we offer them, they start to talk positively about our market and product, those commentaries that spread by word-of-mouth are very powerful.”

In their growth process, aside from the distribution of Inca Kola, the company has opened their doors to other ethnic products through their Continental brand, which also has had success among the Hispanic consumers in the United States.

“Obviously Continental has not stayed with only one product, we have the malta El Sol, which in these moments is a leader in the category of maltas,” said Coën.

Continental Food and Beverage Inc./Inca Kola USA also wants to conquer the Anglo soft drinks market and are opening their doors through sports, Randall Berman commented to Abasto. “We are sponsoring mixed martial arts sports competitions, we sponsor the LFA (Legacy Fighting Alliance) league and the fighter Valentina Shevchenko, who will fight for the UFC world championship. The audience to which we have access to with this sport is national and worldwide. ”

Having been chosen as the company of the year by the NSA confirms the achievements accomplished by this Hispanic company throughout almost four decades of work in the United States.