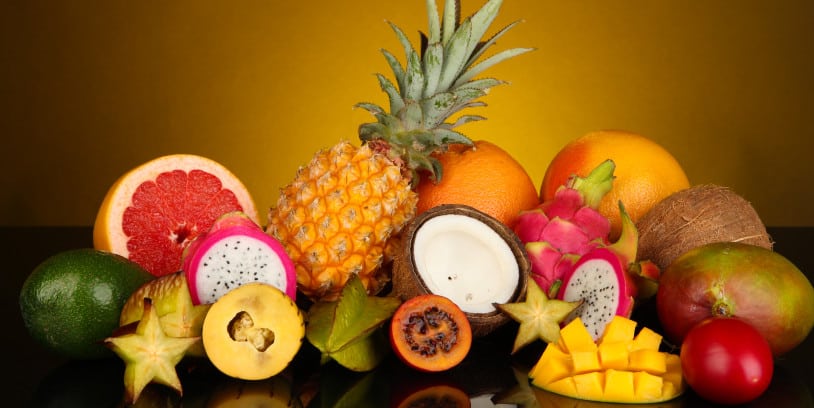 By Paola Ochoa, AGTools
Although they used to be available only at certain times or seasons, nowadays tropical fruits can be enjoyed all year round and thus take advantage of their benefits continuously. This is largely due to the high demand, as they are one of the most preferred fruits by consumers. Indeed, they appear very frequently in Instagram photos and have become an important part of social media networks largely due to their eye-catching colors.

Besides standing out for their intense and exotic flavors, tropical fruits hide excellent nutritional properties.

In the last decade, Hispanics have added to their diet the daily consumption of at least one fruit. Especially tropical fruits have become a favorite due to their richness in antioxidants, sugars, and the high amount of water they contain, which makes them very refreshing.

Among the tropical fruits with the highest growth in consumption in the United States are the following: Dates, Guava, Avocado, Mango, Papaya, Pineapple, and Banana.

The following graph shows the volume growth of these products:

The increase in consumption has also caused the United States to open its borders to more international markets to supply the market demand in the country. A clear example of this is the mango. Its exquisite and peculiar flavor has earned the title of “The king of tropical fruits,” which, in addition to being consumed naturally, is also used in Latin cuisine in juices, desserts, jams, and as an accompaniment when cooking beef, among other meats.

Related Article: USDA to Invest up to $300 million in New Organic Transition Initiative

In 2015, during the second half of the year, the drop in the volume of imported mango was significant. But due to the high demand for the fruit during 2021, we can see how its volume has doubled, especially in the months of July to October.

This is because Mexico, Ecuador, and Brazil, which are the leading exporters of mango to the United States, have increased their volume considerably in the second half of the year, as can be seen in the following graph:

Meanwhile, papaya is a great ally of digestive health and can be consumed in pieces, desserts, juices, and smoothies. For many households, it is the ideal fruit for breakfast and arrives in the United States, mainly from Mexico and Guatemala, representing 83% and 14% of the total volume consumed, respectively, in 2021. Its consumption has increased by almost 80 million pounds from 2015 to last year, representing a 19% growth in the total volume.

Tropical fruits, growing in areas where sun, vegetation, and humidity abound, are rich in vitamins and minerals, which makes them great allies in maintaining a healthy and balanced diet. Because of their flavor, freshness, and aroma, they are perfect for enjoying a light meal in the warmer months and any time of the day. They also give food that exotic touch that delights consumers’ palates.

In the coming years, we will continue to see their consumption increase, especially guava, which in the last ten years has increased its volume by more than 130%, and dates with an increase of more than 700%.