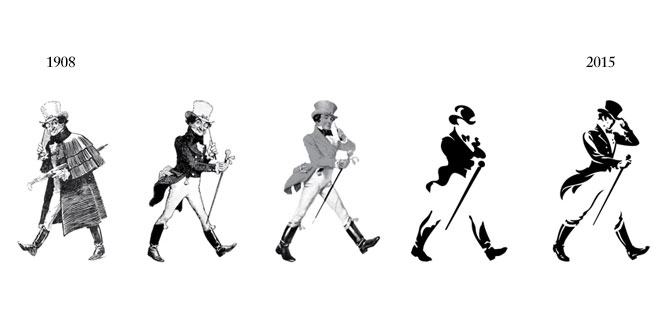 The history of the brand begins in 1819 with a young man who gave the whiskey its name: Johnnie Walker.

It’s a difficult start for a 15-year-old teenager who has just lost his father. The grocery store that John acquires in Kilmarnock, a small town West of Scotland, allows him to market whiskeys that were not consistent, a circumstance that he uses to mix them in certain proportions and produce his own whiskey with a unique, special and lasting flavor that captures great notoriety in the locality as “John Walker’s whiskey”.

Whiskey’s distillation in Scotland dates back to the Fifteenth Century, according to an official mention of the “Scotch spirituous” in a treasure scroll, dated June 1, 1494 and which belonged to John Cor, a Scottish friar of the Lindores Abbey in Fife, who is credited for creating the first whiskey in history.

The important part of the story is that John Walker was in the right place, at the right time, with the right product: the arrival of the train to Kilmarnock in 1843, making his whiskey the leading product.

The tradition continues with his son Alexander, who in 1857 makes the family business skyrocket with the launch of Johnnie’s Walker first commercial mix: “Old Highland Whiskey.” The new blend is shipped out of Scotland, but a fortuitous event during the first trip radically changes the history of the brand: the breaking of the bottles.

The situation is controlled with the design of a square-sided container. In 1860 the Walker house ships its product with the new design and takes it to the whole world.

Another peculiarity of the square bottle is discovered by one of its distributors when placing the label with an inclination of 24 degrees, which allowed better visibility of the logo.

These coincidences become very effective branding badges, which mark the definitive difference with competitors. At the beginning of the 20th century, Johnnie Walker was already a whiskey recognized worldwide for its quality, flavor and the unmistakable shape of its packaging.

Around the same time, managers decide to look for another marketing element to show the brand’s differential values and this option was unexpectedly presented in 1908, when an illustrator of posters called Tom Browne, drew on a napkin the figure of a walker.

Related Article: Color, a Strategic Weapon In The Battle of Brands

The cartoonist had been invited to the restaurant by Lord Stevenson, executive of Johnnie Walker. After the meeting, Browne produced a series of ads featuring the “Striding Man” in different situations, happily walking.

Browne died in 1910 at age 39 and was replaced by Sir Bernard Partridge, the leading cartoonist for Punch magazine, who worked with the character for 35 years.

The “Striding Man” or “Walking Man” is the greatest emblem in the history of Johnnie Walker that has surpassed the century. In these years the character has had variations into which stylizations made to the drawing are found, but the most important change is the most subtle: the orientation turn from left to right, made in 1999.

The “Wayfarer” happened to look towards the future, becoming a representative symbol of progress and pride. With the slogan “Keep Walking” and it’s iconic “Striding Man”, the Scottish brand calls for overcoming and an invitation to not giving up.

The gentleman with the hat and cane that has evolved over time endured an episode without precedent in its history. In January 2018 it was replaced by a female adaptation: “Jane Walker”, in a special limited edition, in favor of feminist causes fighting organizations.

It is currently distributed in more than 200 countries around the world. Its level of acceptance is so high, that every second six bottles of whiskey are sold, reaching an impressive quantity of 518,000 bottles a day.