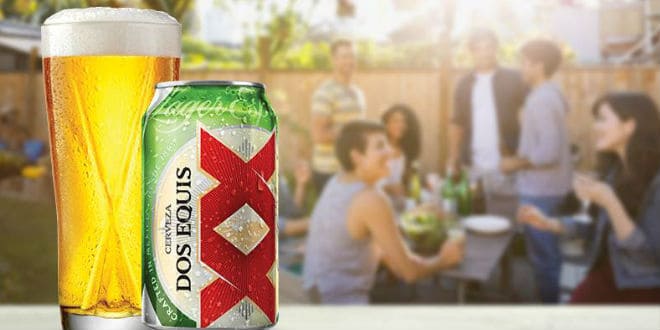 Starting in May Dos Equis is rolling out a multi-channel promotion that proves Dos Equis is the only beer consumers need for their best summer ever. “The Beer that Makes Summer Summer” builds on the brand’s Interesante marketing campaign and offers consumers a chance to win daily prizes that include the summer’s hottest essentials.

“With seamless support by the brand’s digital, social and TV platforms, as well as a sweepstakes with daily prizes, Dos Equis will be top-of-mind and in consumers’ hands throughout the key summer holiday occasions,” says Hannah Dray, Dos Equis Brand Manager, Heineken USA.

“This creative summer program includes an interesante ‘Fanny Fridge’ that keeps a six-pack of Dos Equis cans cold on the go and is perfect for sharing with friends. In addition, Dos Equis should be interestante to retailers and on-premise operators in other ways: Mexican Imports, +10.8% , are outpacing total beer sales, Dos Equis cans are +13.1% within off-premise, and Dos Equis Especial draught is the #2 fastest-growing Mexican draught brand, +6 within total on-premise,” continues Dray.

This May-August promotion takes the hot summer essentials featured in the brand’s television advertising, “Hit Single”, and offers them as consumer prizes.

Localized activations in Texas and California, including social and digital media, will feature the prizes, while radio and OOH, media partnerships, PR stunts and impactful POS provide additional support.

A sweepstakes gives consumers who snap and text a picture of their summer moments with Dos Equis the chance to win a fanny pack cooler or a box packed with the summer essentials.

Display enhancers including standees, inflatable cooler floats and towel jackets will drive shopper awareness and takeaway. Sampling will engage consumers throughout the season with mini fashion shows where Dos Equis fans can show off their Dos Equis summer essentials, share photos and enter the sweepstakes.