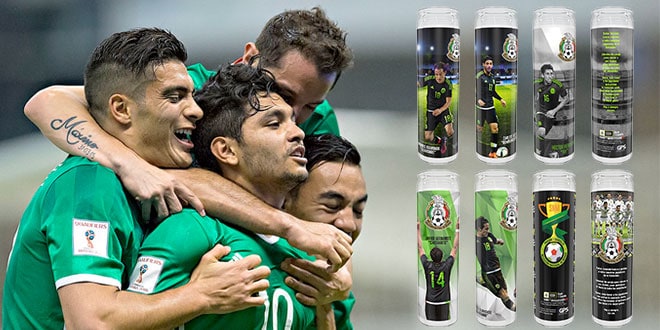 The day that all soccer fans await anxiously gets closer and closer. In Russia on June 14, the most important soccer tournament in the world will begin, with fans of the Mexican National Team following all their team’s games, wearing their jersey’s and even lighting candles to add the touch of faith, with hope that they will win all the matches.

For fans in the United States to feel closer to their idols on the Mexican National Team, Global Products Solutions (GPS Imports Inc.) is distributing the team’s official merchandise in most Hispanic stores in the US.

Arturo Pérez, GPS Imports’ National Sales Director, told Abasto that the Mexican National Team trusted his company to distribute their official merchandise because they “were looking to team up with a reputable company and also had access to the most popular points of sale among Hispanics throughout the country.”

GPS Imports has an extensive network of distributors that reach more than 50,000 points of sale in the United States. Since they began distributing the Mexican Soccer Team’s official merchandise last year, the most popular item among fans are the candles.

“All items have a niche, sometimes people look for one more than another, but the candles are definitely the most sought after. Who doesn’t want to have a San Chicharito or San Guardado to pray that we win the World Cup, “said Pérez.

This coming May 28th, as part of their preparation for the World Cup, the Mexican team will travel to Pasadena, California where Mexico will play a friendly game against Wales at the Rose Bowl and it is likely that all seats will be sold in the stadium.

Daisy Brand Partners with the Mexican National Team for its U.S. Tour and Road to Russia

For this game, no Mexican fan can be left without wearing the team’s official jersey and carrying some of the team’s collection items.

According to Nielsen, 58% of soccer fans in the US have a collectible item from their favorite team or player and 54% say that wearing their team’s shirt is an important part of the celebration when they watch the games on television or being in the stadium.

This is a good reason for Hispanic stores and supermarkets to have the Mexican National Team’s official merchandise. “Generally, in our countries it is very easy to find these items, but it’s more difficult in the United States, which is why we look for those items in supermarkets and places that all Hispanics visit,” said Pérez.

Before traveling to Russia, the Mexican National Team will play their farewell match against Scotland at the Azteca stadium in Mexico City on June 2nd.