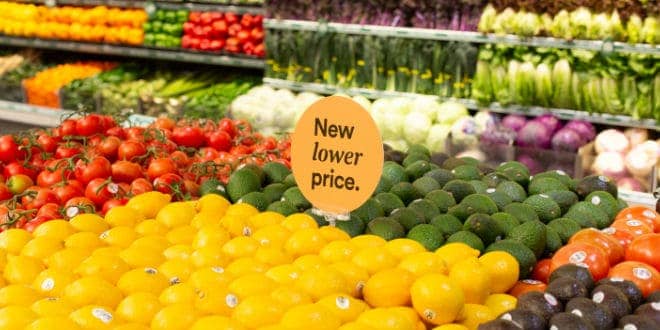 Amazon and Whole Foods Market announce a third round of price cuts, offering new lower prices on fresh produce for all customers and expanded Prime benefits with more exclusive weekly deals on popular products across departments.

Starting today, customers will find new price cuts on hundreds of items throughout the store with an emphasis on high quality, peak-of-season produce, including greens, tomatoes, tropical fruits and more, according to a press release.

“Whole Foods Market continues to maintain the high quality standards that we’ve championed for nearly 40 years and, with Amazon, we will lower more prices in the future, building on the positive momentum from previous price investments,” said John Mackey, Whole Foods Market co-founder and CEO.

Prices will be reduced by an average of 20 percent on select items throughout the store, Whole Food says. Examples of these new price cuts include, large yellow mangoes ($1/ea.), mixed-medley cherry tomatoes ($3.49/12oz), and organic bunched rainbow chard ($1.99/ea.).

“The standards for how our products are sourced, grown and produced are powerful and set Whole Foods Market apart from the competition. We will continue to focus on both lowering prices and bringing customers the quality they trust and the innovative assortment they expect from our brand,” said Mackey.

In addition to new price cuts for all shoppers, Prime members will now save more at Whole Foods Market with double the number of exclusive weekly Prime Member deals and deeper discounts. Over the next few months, customers can expect more than 300 Prime member deals on some of the season’s most popular items.

Prime members can also receive an additional 10 percent off hundreds of sale items throughout the store. Through the end of April, customers who try Prime can get $10 off their $20 purchase in-store at Whole Foods Market when they try Prime at amazon.com/WholeFoods10.

These price cuts will build on the hundreds of lower prices that have been introduced to customers since the Amazon and Whole Foods Market merger, ranging from Whole Trade organic bananas and Chobani yogurt to 365 Everyday Value Cage-Free Large Eggs.

But according to news publications, the new price cuts at Whole Foods could be relative.

One study conducted after Amazon officially took over ownership of Whole Foods showed that the vast majority of items sold in stores did not receive price cuts. The Wall Street Journal reported earlier this year that Whole Foods increased prices on many products, including ice cream, soap, cookies, olives, and more, in order to keep up with increased costs from supplies and transportation.

“Amazon and Whole Foods understand there are still price perception issues that need to be addressed,” said Tory Gundelach, analyst at Kantar, in an interview with CNN.