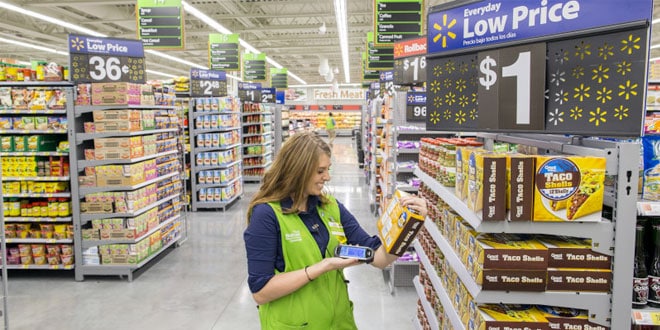 The decline in food prices has reached one of its lowest points in decades, as Walmart fights against its competitors to maintain its reputation of being the store chain with the lowest prices in the market.

The Wall Street Journal reported that executives at the world’s largest retailer commented that the company is making a strong investment to lower prices in its US stores as competition grows against Amazon and European discount stores Aldi and Lidl.

Walmart is testing the price reduction strategy at its stores in the Southeast and Midwest regions, according to the WSJ. According to data from Wolfe Research, Walmart’s basket price for grocery products is 5.8 percent lower than the average in the greater Philadelphia area. In Atlanta the difference was 4.9 percent and in Southern California, 2.7 percent.

Hard to compete with Walmart

Although the war for low price food products benefits consumers, on the other hand it affects traditional supermarkets. Last year, buyers paid 1.3% less than the previous year for eggs, meat and other commodities.

Two-thirds of consumers recently surveyed by the Food Marketing Association said they chose where to buy their food based on prices.

This consumer trend has an impact on grocery stores that can not compete with the low prices offered by Walmart. US grocers’ operating profits fell 5% last year, according to Moody’s Investors Service cited by the newspaper.

Kroger is one of the most affected by the price war. The supermarket chain recently reported its first quarterly reduction in sales over 13 years. Cincinnati-based Kroger’s shares declined 3% in February, after Wolfe Research reported that Walmart was cutting prices in the Midwest, according to the WSJ.

Over the past two years Walmart has been pushing its campaign to remain as the leaders of the low prices after seeing increased consumer interest in online shopping where Amazon is a dominant competitor.

According to the WSJ, Megan Crozier, Walmart’s senior vice president of packaged goods, said the mega-retailer wants its prices to be 15 percent lower than its competitors 80 percent of the time. “That’s why we exist,” said the executive.